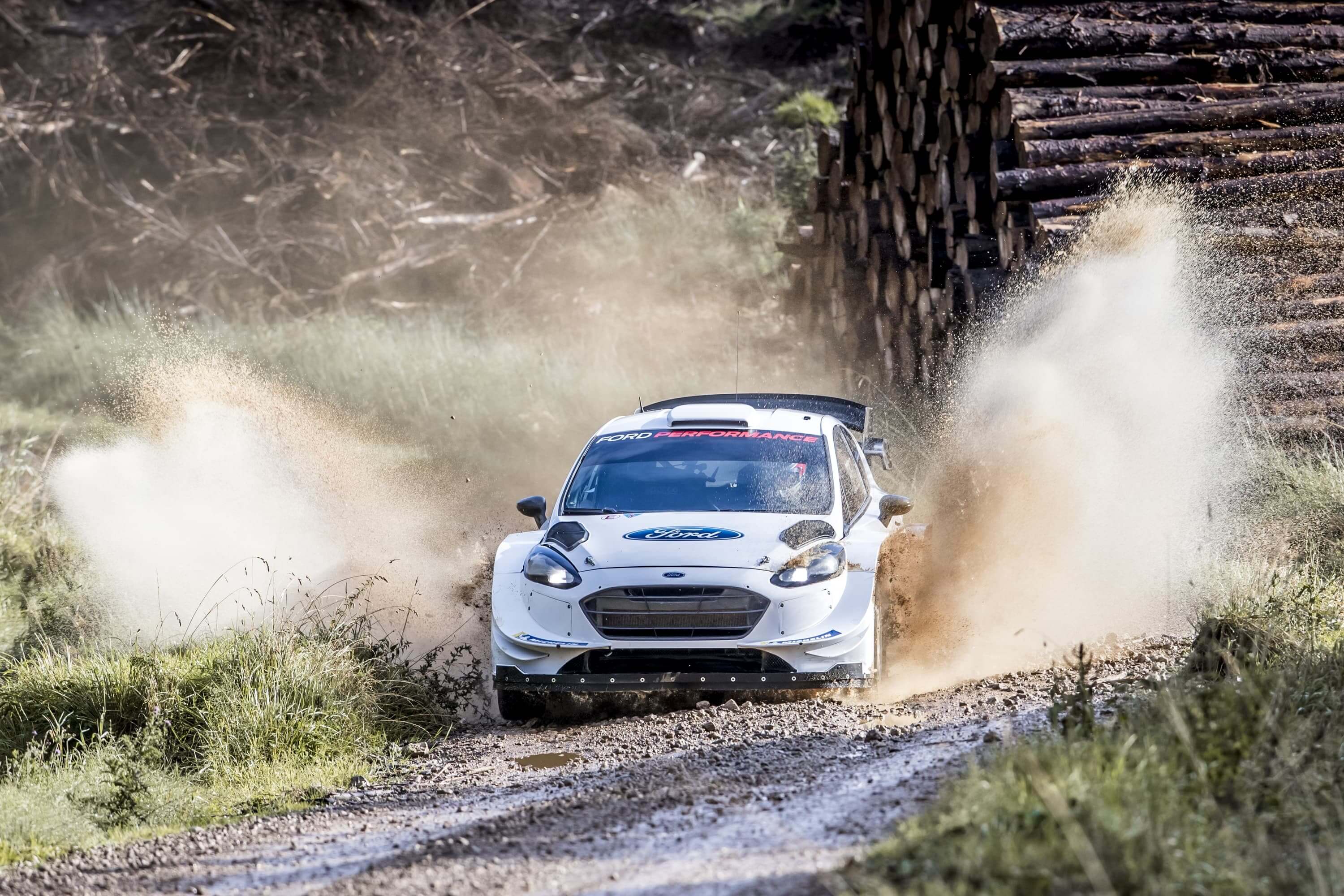 We get a flying passenger ride in Ford’s latest rally machine.

We’re quite lucky swines as motoring journalists that we regularly get the chance to experience speeds that few others have the chance to. Frequently, we’re out on track testing the latest performance cars, and sometimes we get driven around by driving professionals too, who can showcase the very extreme limits that the motor car can reach. 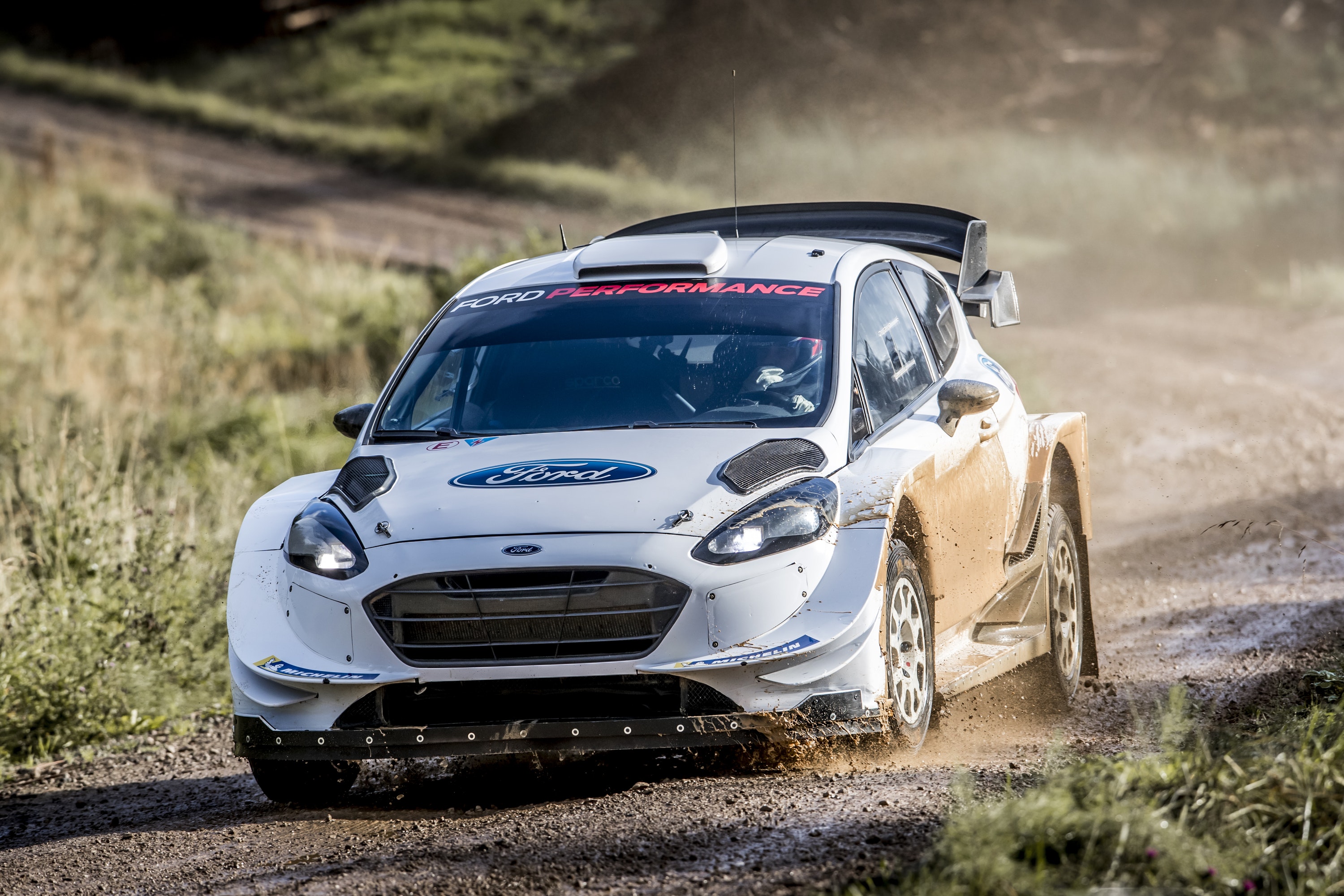 But, by and large, it’s all conducted on tarmac. And though speeds are higher, there’s always a sense of security imbued by a dry, sticky track when compared to, say, a rally stage.

However, recently, at M-Sport’s testing facility in Cumbria, we got the opportunity to see just what going fast on loose surfaces is like in a WRC rally car – from the passenger seat, that is. 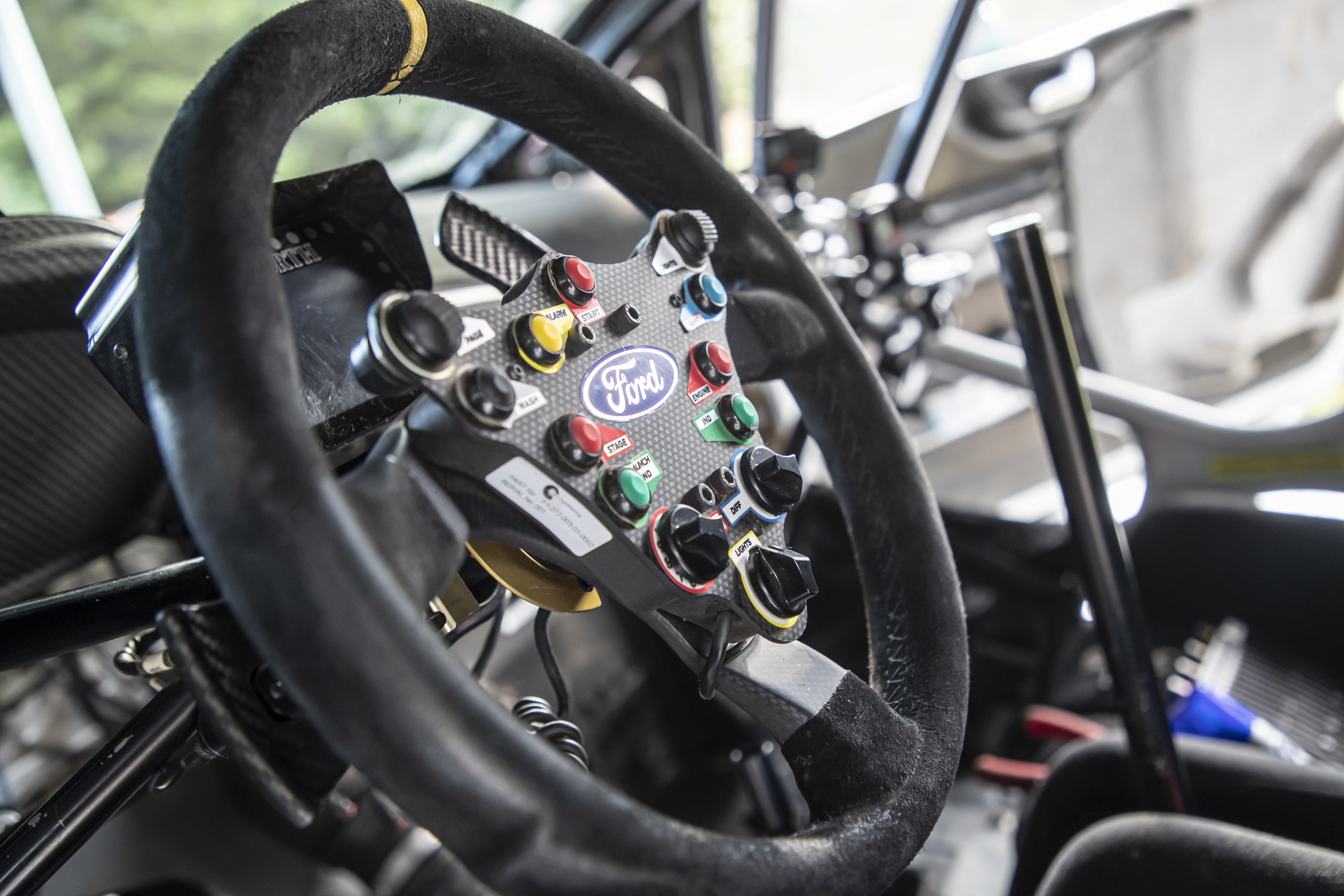 The vehicle? That’ll be a 2019 Ford Fiesta WRC car. With a 1.6-litre turbocharged four-cylinder engine under the bonnet, you could say it’s closely related to the regular, road-going Fiesta to begin with. But inspect a little closer, and you’ll find it’s far from something you’d see out on the streets.

There’s a full four-wheel-drive system going on here, with mechanical differentials at the front and rear linked with an active centre differential. A six-speed sequential manual keeps things ticking, and thanks to just shy of 380bhp and 450Nm of torque, the little Fiesta can jettison from 0-60mph in under four seconds, and crack around 124mph – on all surfaces.

Getting inside is a challenge. The door opens conventionally enough, but from then on, it’s far from what you’d expect to see in a production Fiesta. The large roll cage requires you to dip and slide underneath, before finding space in the figure-hugging bucket seats. To the left, the cabin is awash with tech and mechanical gear – it’s a mash-up of old-school and new-school features. 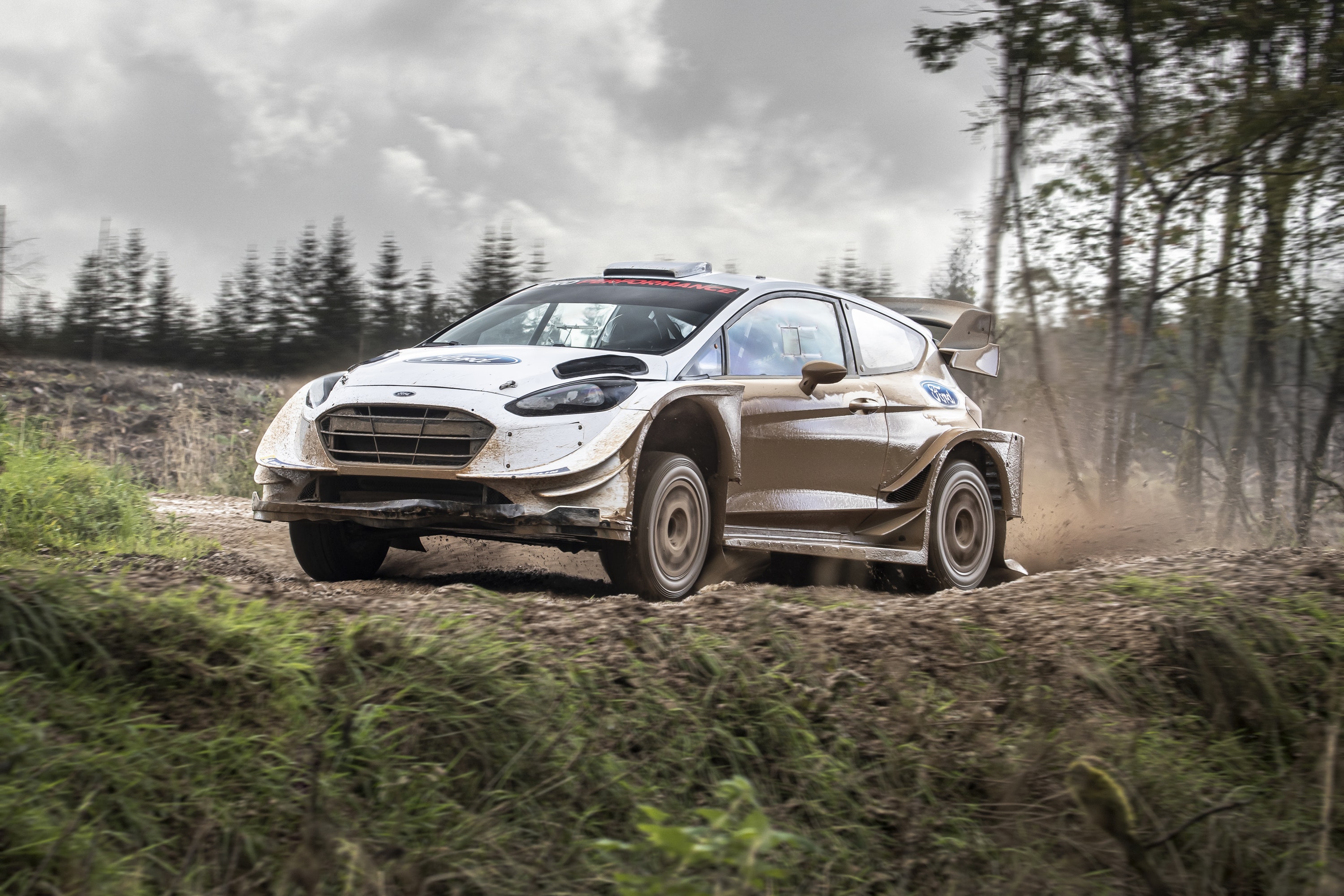 It’s at this point that Gus Greensmith, winner of the 2014 British Junior Rally Championship and current WRC driver, points out a technical issue with the car from his position behind the wheel. The paddleshifters for the Fiesta have broken, so he’s shifting with a traditional lever setup.

Into first, and we roll up to the start line. For a few seconds all remains calm, the Cumbrian drizzle lingering on the air ahead. Then, Greensmith plants the throttle while holding the brake, sending the little four-cylinder’s revs banging off the limiter – and then we’re off. The soft suspension setup means the Fiesta rears back like a startled cat, before whip-cracking down the track at a speed which feels scarcely believable.

There’s a flowing right-hander first, and Greensmith tips it in what feels miles early – but the Ford serenely cascades around the bend, maintaining speed and fury in equal measure. 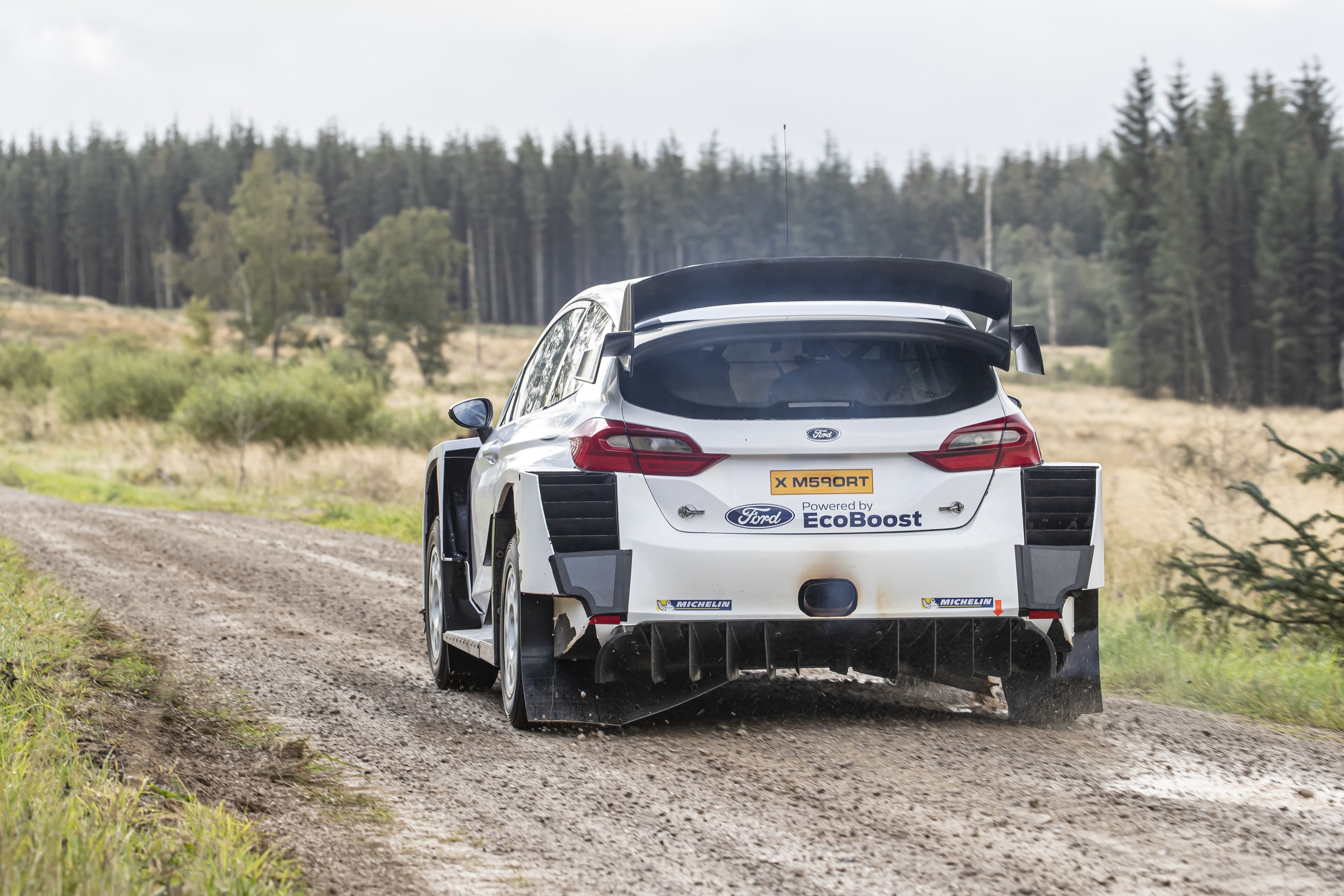 A short jump comes up next – the Fiesta takes off for a few seconds before planting back to earth – and then a log pile flurries into view perilously close to the Fiesta’s extremities. Before we’re able to contribute to the mass-production of toothpicks, we’re around the bend and pushing onwards.

The most noticeable feature is simply how little drama the Fiesta requires to conquer each challenge. On most occasions drifting a car means scrubbing off speed in the process, but the WRC seems to actively increase in forward progression despite its perpendicular approach. It feels like witchcraft, and it looks like it in the pictures too.

We’re up a short, snappy chicane section with Greensmith banging through the gears – and just like that, the route is over. It may be over 3km in length, but the pace the WRC attacks it means it’s over in a heartbeat.

Brakes squeaking and engine buzzing lower now, the Fiesta enters the pit section. Clambering out of the cabin, there’s a certain feeling of exhaustion mixed with euphoria – think finishing a long cycle ride or getting off the dodgems at the funfair. More than anything we’re quite sure that there’s nothing like it.