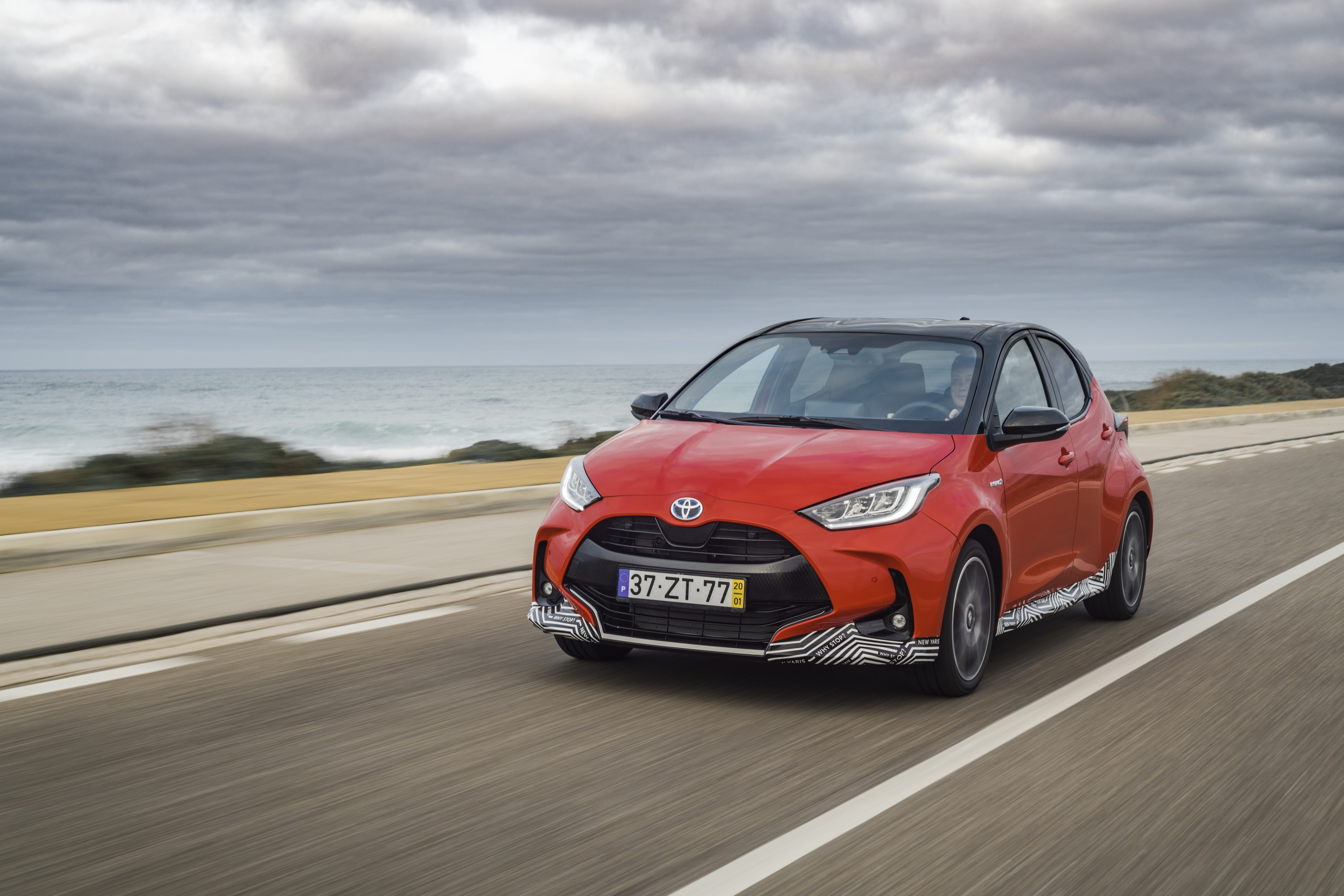 Toyota's new Yaris is on the horizon, but how is development shaping up? Ryan Hirons gets behind the wheel of a prototype in Lisbon to find out.

What you’re looking at here is a prototype version of the Toyota Yaris, with the fourth generation of the Japanese supermini set to arrive on the market in September.

Although the light masking would suggest otherwise, it’s a way off dealer forecourts for now, but Toyota has let us behind the wheel of this not-quite-but-very-nearly-production-ready version of the hybrid hatchback as it heads into its final phase of testing. With a new platform underneath its skin, a fresh development of the firm’s hybrid powertrain and more technology on board, there’s a lot of potential for the Yaris to be a success.

So, how is this Ford Fiesta and Volkswagen Polo rival shaping up? We find out… 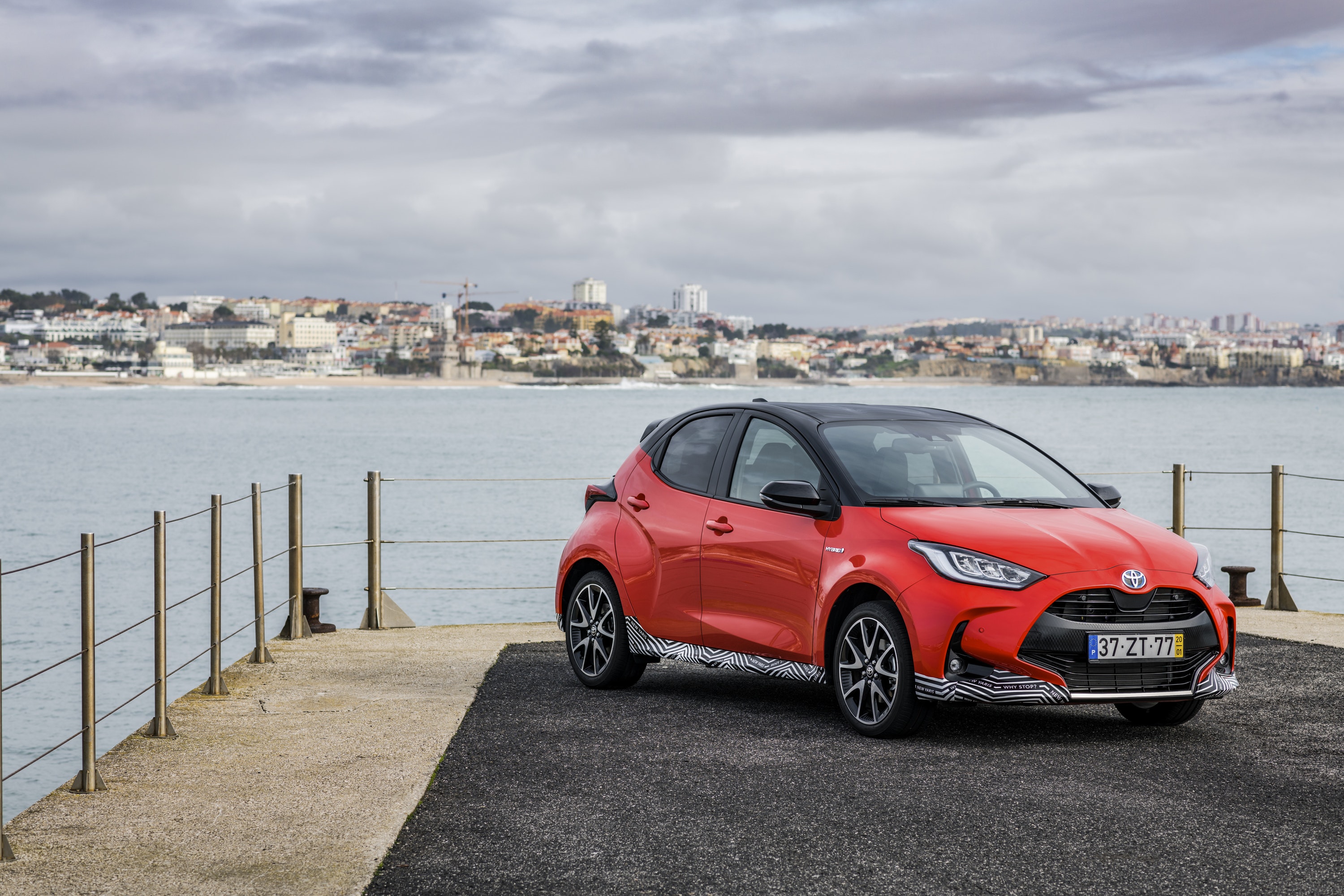 Playing a crucial role in this fourth generation of the Yaris is Toyota’s GA-B platform. A development of the TNGA underpinnings that its latest models (excluding the Supra) are sitting on, it’s said to offer hugely improved torsional rigidity and a driving position set lower in the car without growing too much outside. 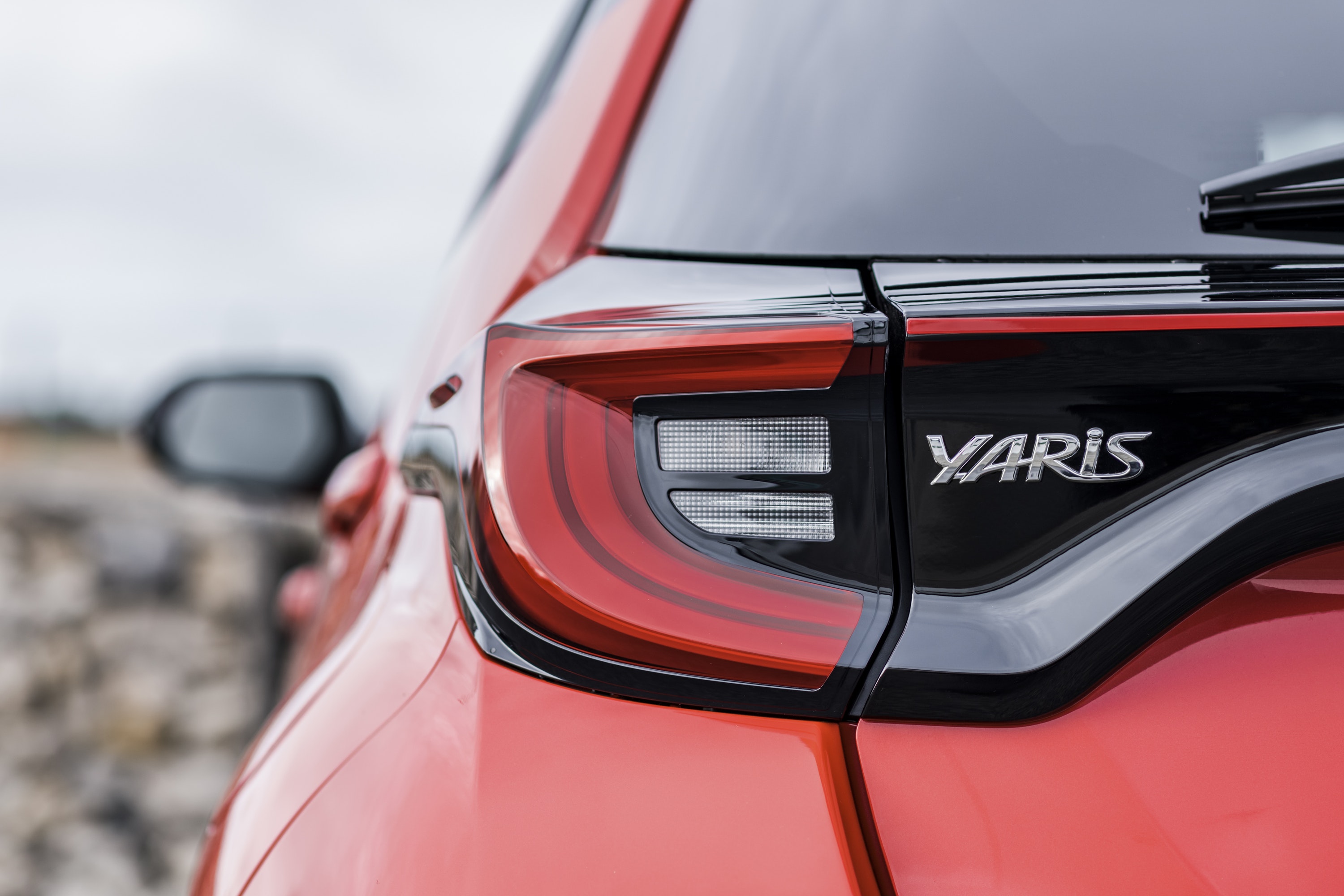 What that theoretically means is a better driving car, as well as a more comfortable one. Also new here is its hybrid powertrain with an engine derived from the latest Corolla, as well as a lithium-ion battery pack. There’s a complete visual change from its predecessor on the outside, too.

Put simply, Toyota has taken the 2.0-litre four-cylinder petrol engine from the Corolla, knocked it down to three cylinders – which has dropped capacity to 1.5 litres – while linking it up to a new lithium-ion battery. Like the Yaris Hybrid before it, power is delivered to the front wheels via a CVT gearbox. 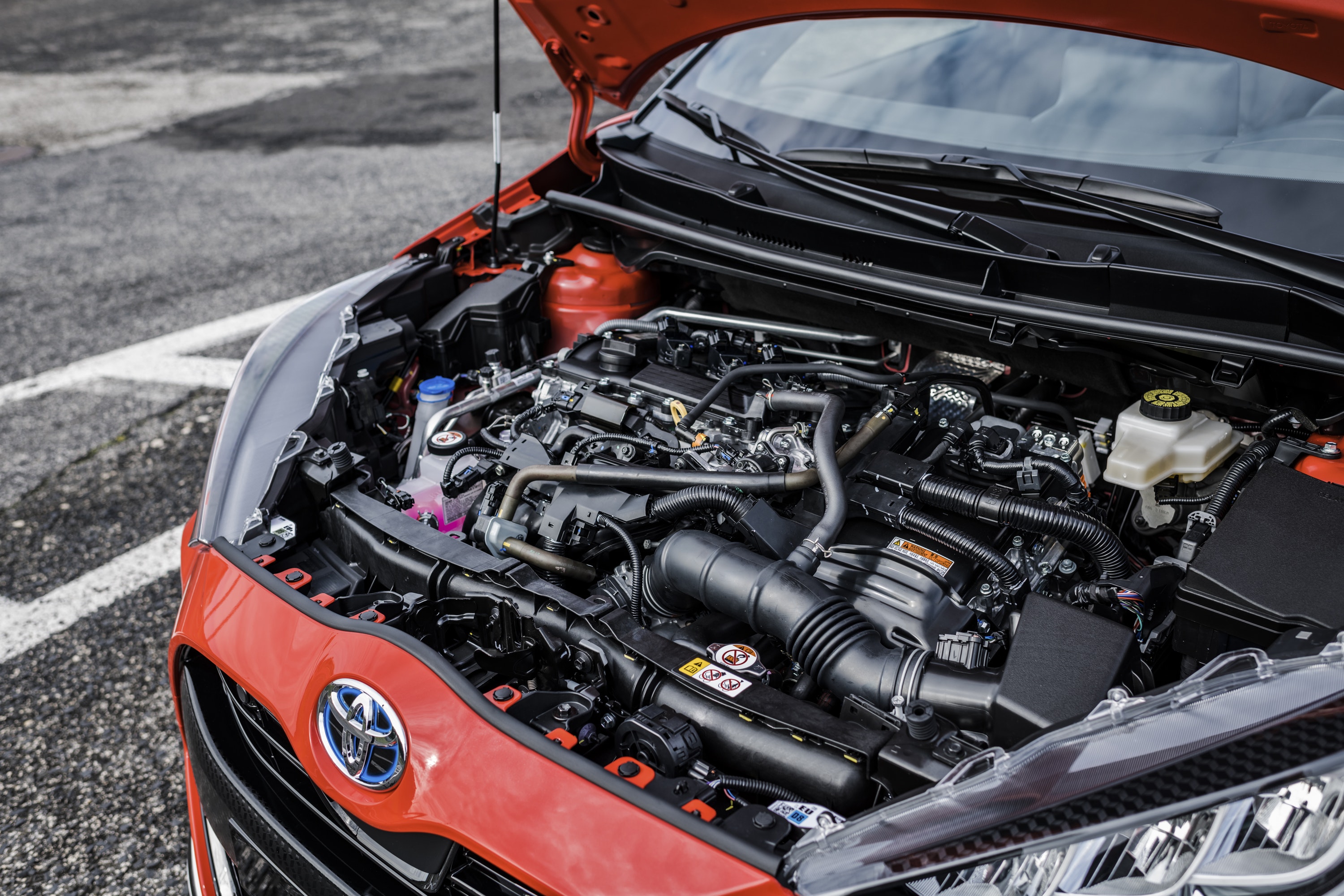 With the car in pre-production phase, Toyota is holding off on full details for now, but we do know the system produces 114bhp and sends the car from 0-60mph in 10.1 seconds. The firm also claims 80 per cent of urban driving can be done on electric power alone, and although official fuel economy figures are some way off yet, we managed about 60mpg over our test run.

It’s apparent off the bat that this powertrain is leaps and bounds ahead of the one preceding it. Power delivery is much smoother, refinement is up across the board and the CVT no longer tries its best to let the power unit imitate an elephant in pain.

Take criticism with a pinch of salt until we get behind the wheel of the production-ready version, but we did find uphill driving to confuse the gearbox into a whirlwind of droning revs on occasion.

Toyota has gone in big on its claims of an improved drive thanks to the increased torsional rigidity and the minor alterations to the driving position to enhance the behind-the-wheel feel.

What doesn’t need to be put in numerical terms is the actual improvements. Immediately noticeable is how much more agile the car feels, which doesn’t translate to just more fun but crucially a car that’s very well-suited to tackling the urban jungle.

That said, it still feels off the pace of the thrills a regular Fiesta will deliver, and our prototype machine had something of a tendency to crash over bumps, though we’re told that’s something its engineers are looking at. We’ll wait to see if that’s a resolved issue down the line.

We know, that thin line of camouflage may make it incredibly hard to see the Toyota Yaris, but we can assure you it is indeed there. 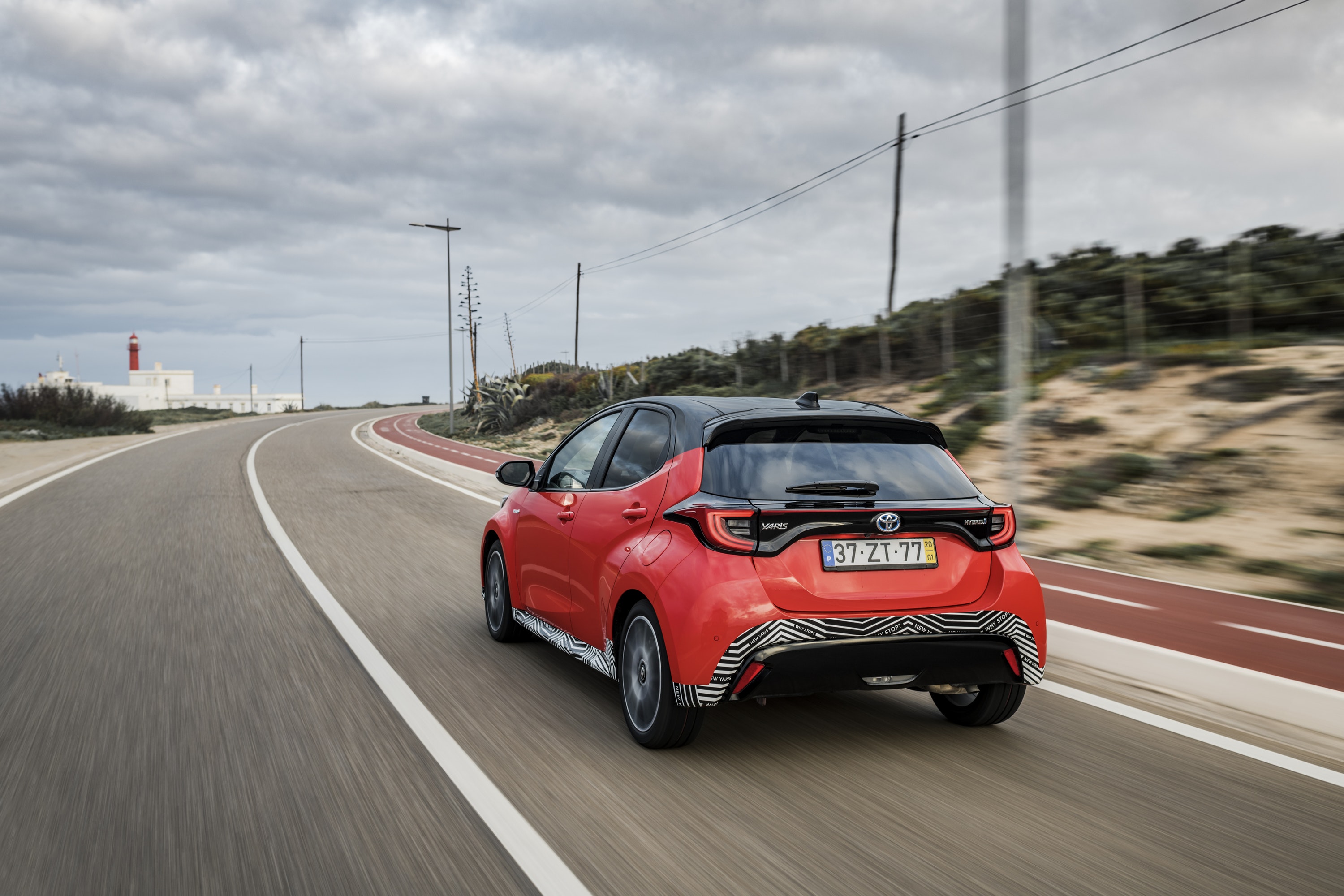 Joking aside, the relatively exposed body means we’re well-positioned to deliver a verdict on the hatchback’s look. A more aggressive approach to design is one that has worked impressively well here, with its angry face delivering more on-road presence and a smart rear end that puts it at the forefront of the supermini beauty contest.

Toyota’s efforts to improve the overall feel of the cabin have proven effective. The increased space up front between driver and passenger is an instant welcoming factor, while the newly engineered driving position is leaps and bounds ahead of its predecessors’ imitation of driving a lorry that has offset pedals. 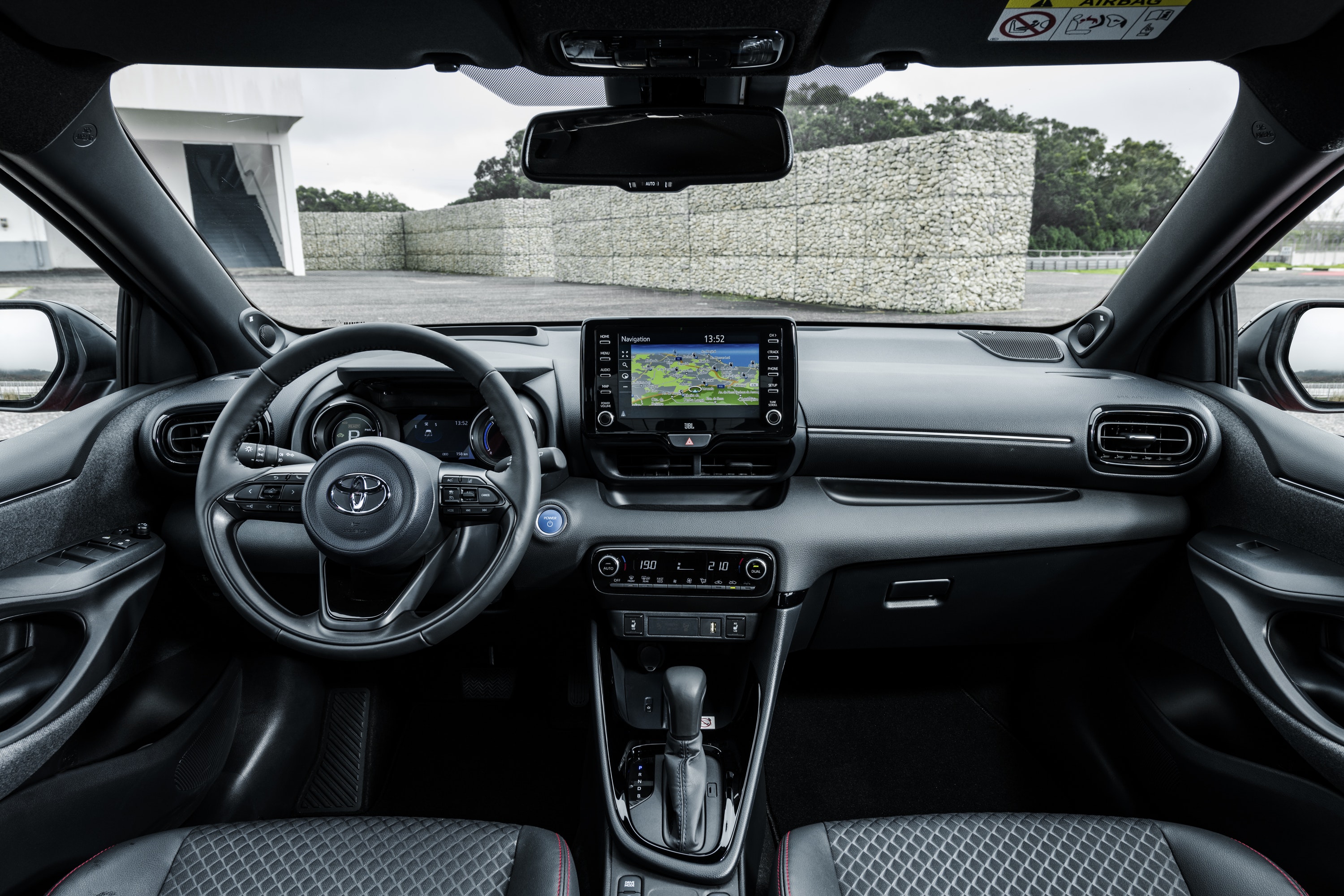 Boot capacity weighs in at 286 litres, which puts it a fair way off the Ford Fiesta and Volkswagen Polo, though space in the back row is sufficient for the average-sized adult to cover a reasonable journey in.

With some of the cabin plastics in our test prototype said to be a way off production standard, we’ll wait to get behind the wheel of a market-ready car before passing judgement on overall quality.

With its market arrival still some way off, exact pricing for the new Toyota Yaris is still a guess at this point — though Toyota has thrown around the word ‘competitive’ when pressed on the issue.

Keeping that in mind, plus a little extra for its hybrid guts, we’d speculate around £18,000 when it does go on sale later this year, though we’ll know for sure much closer to the time.

What we do know is that it’ll feature the firm’s Safety Sense suite of assistance technology across the board for no extra cost as it pursues a five-star Euro NCAP rating. Keep your eyes peeled to see if that comes to fruition.

It may only be early days for the fourth-generation Toyota Yaris, but signs of the hybrid hatch being a real contender for the supermini crown shine through.

Drivability is much improved over its predecessor both around town and when things get a little twistier, and the overhauled powertrain has taken the hybrid from testing the waters in the last Yaris to a genuinely recommendable option over petrol rivals.

We’ll have to wait until later in the year before making a definitive verdict on the new Yaris, but things are looking good.