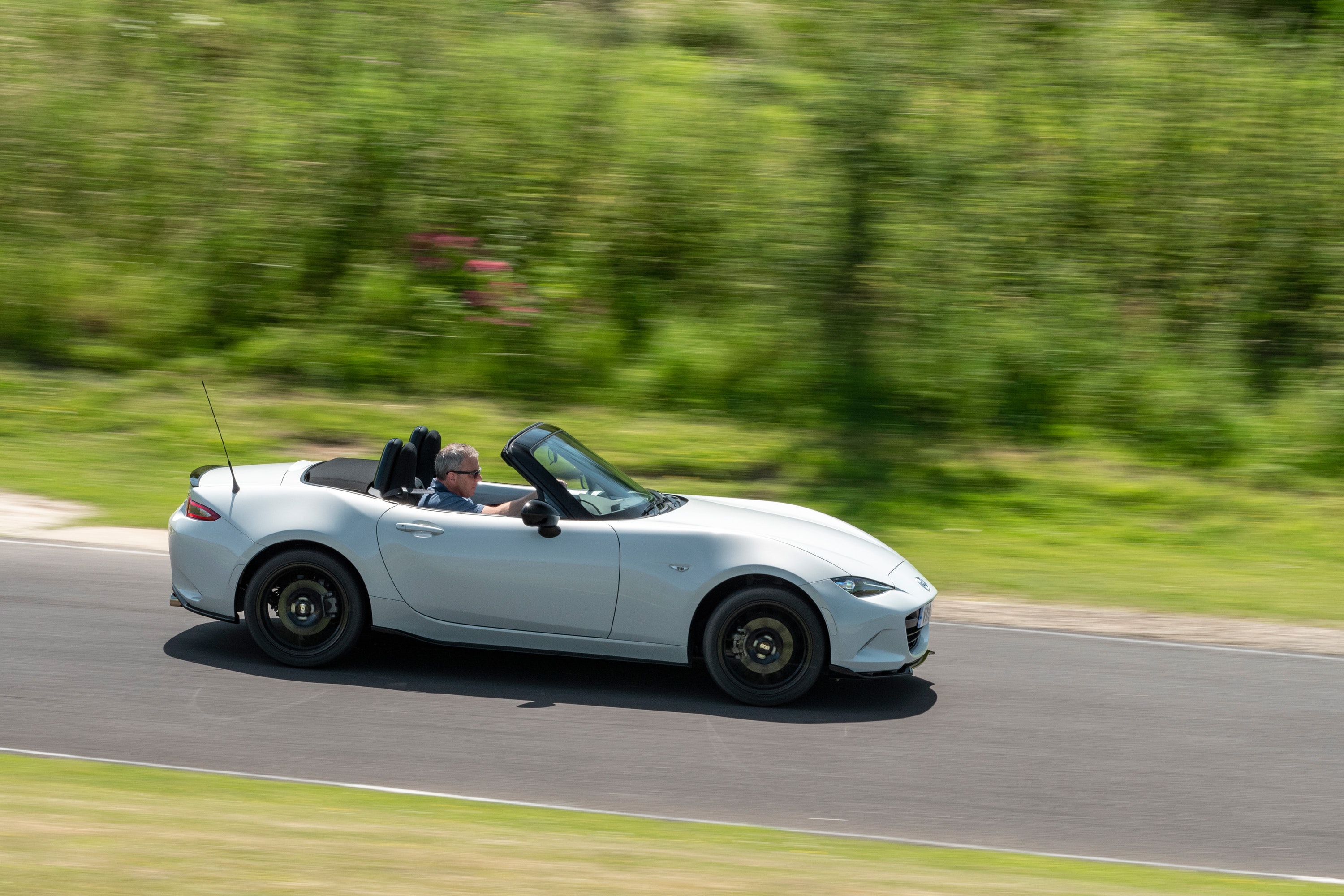 Mazda has introduced new upgrade packs for its iconic sports car, but do they enhance the MX-5? Ryan Hirons finds out…

If there’s one thing the Mazda MX-5 can’t be faulted for, it’s for the huge aftermarket support it has. Tuners and enthusiasts across the globe will happily sell upgrade kits to boost the car’s performance, handling and appearance.

It’s no wonder then that the firm itself is getting in on the party with its own tune-up parts in a bid to offer buyers a little bit more choice when it comes to modifying their own sports car. It’s doing that with a set of new options — the Cup and Design packs. The latter also contains the former, but we’ll get to the specifics shortly. We’re behind the wheel of an MX-5 fitted with the design kit to see if it can enhance the car’s appeal…

Available from any Mazda dealer, the Cup and Design packs bring a suite of new kit to the Mazda MX-5. The former is aimed at improving driving dynamics and the sensation of the car, bringing with it a new Eibach suspension kit, 17-inch BBS alloy wheels and a Bastuck exhaust kit. 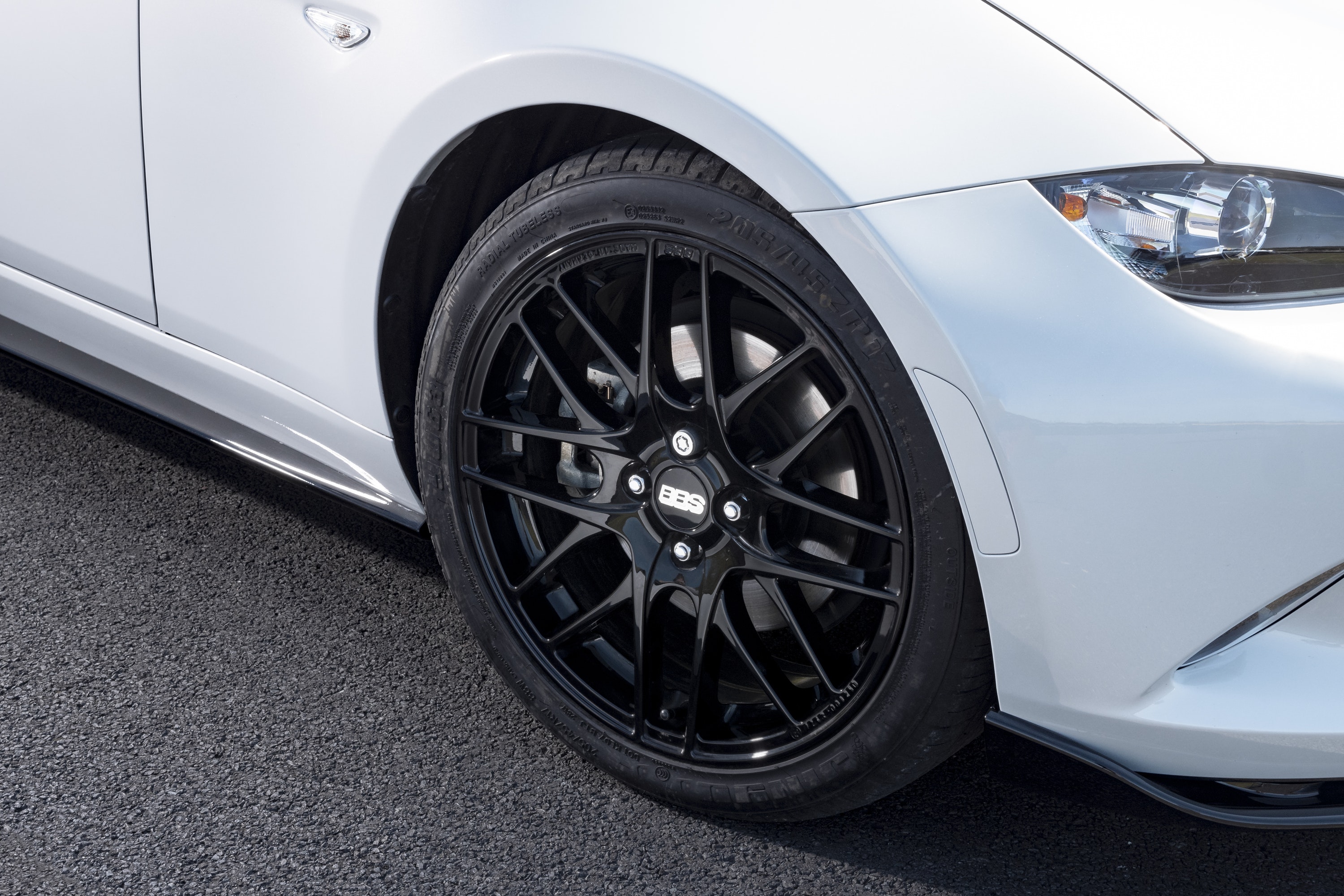 Adding to that, Design makes some visual changes to the car with the addition of a new front splitter, side skirts, new trim to the rear bumper and a black spoiler. Inside, you get Alcantara upholstery around the handbrake, gear stick and door panels. 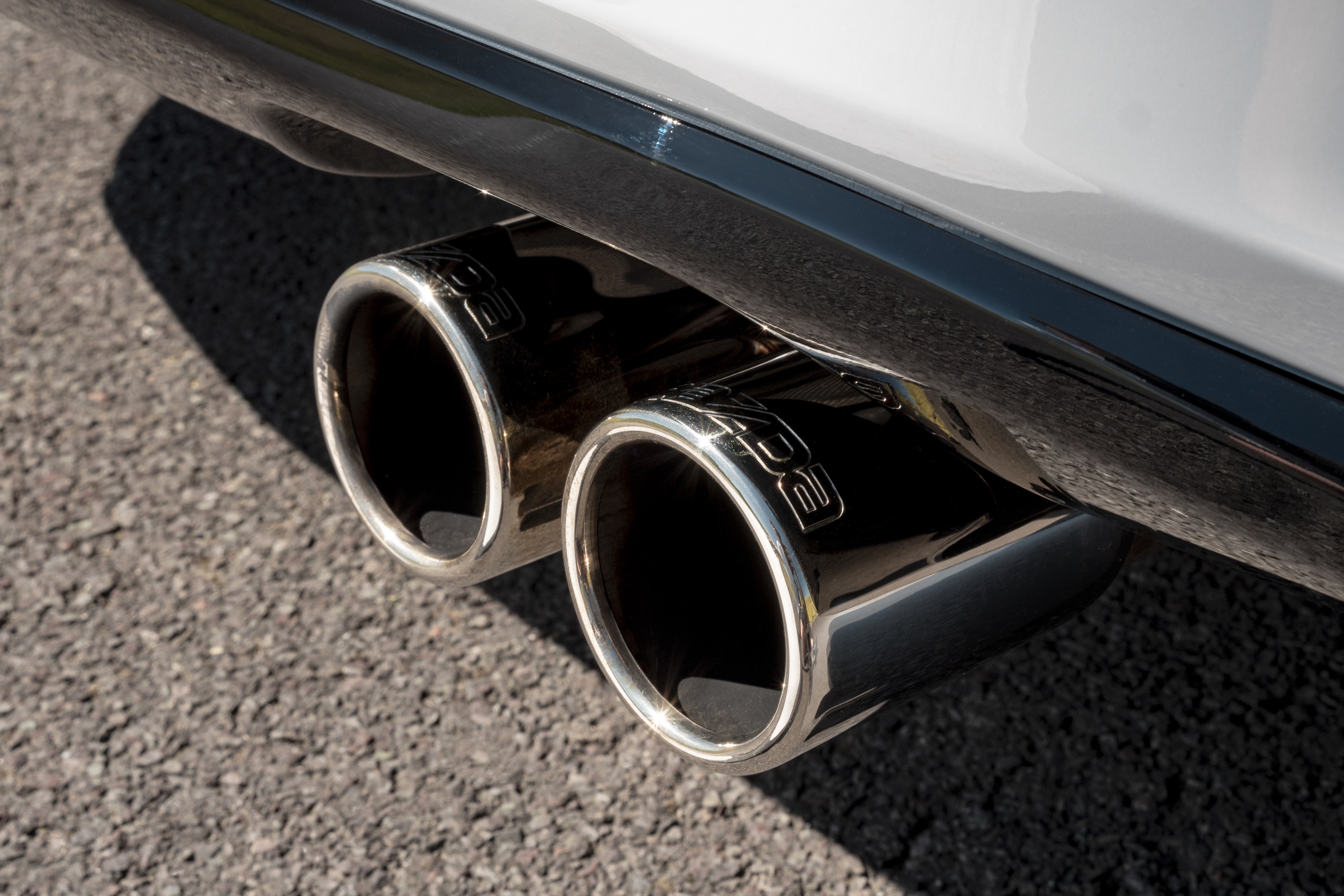 This kit is available on any Mazda MX-5 delivered fresh from the factory, or as an upgrade to any fourth-generation ‘ND’ model produced since its 2016 introduction. Those wanting the BBS wheels will need a post-2018 2.0-litre car, though.

There are no powertrain changes to report with the new Cup or Design pack, so engine specifications remain as before regardless of the kits being fitted to a 1.5-litre or 2.0-litre car.

It’s the latter we’re driving here, which is a four-cylinder naturally aspirated unit. Sending 181bhp and 205Nm of torque to the rear wheels via a six-speed manual gearbox, 0-60mph in soft-top guise remains at 6.3 seconds with a top speed of 136mph possible. Mazda claims the car can return 40.9mpg in mixed driving conditions, with CO2 weighing in at 156g/km.

With nothing changed, the unit remains as delightfully smooth as ever. It’s not a whirlwind of power but, with such a light chassis to work with, progress is brisk enough and feels even faster too. Its shift action continues to be one of the best on the market, too.

Buyers opting for either of these packs are likely looking for a more involving driving experience, and we’re happy to report that they’ll find it here. The new suspension setup works well to reduce body roll, in turn resulting in more confidence in the car under harder cornering. 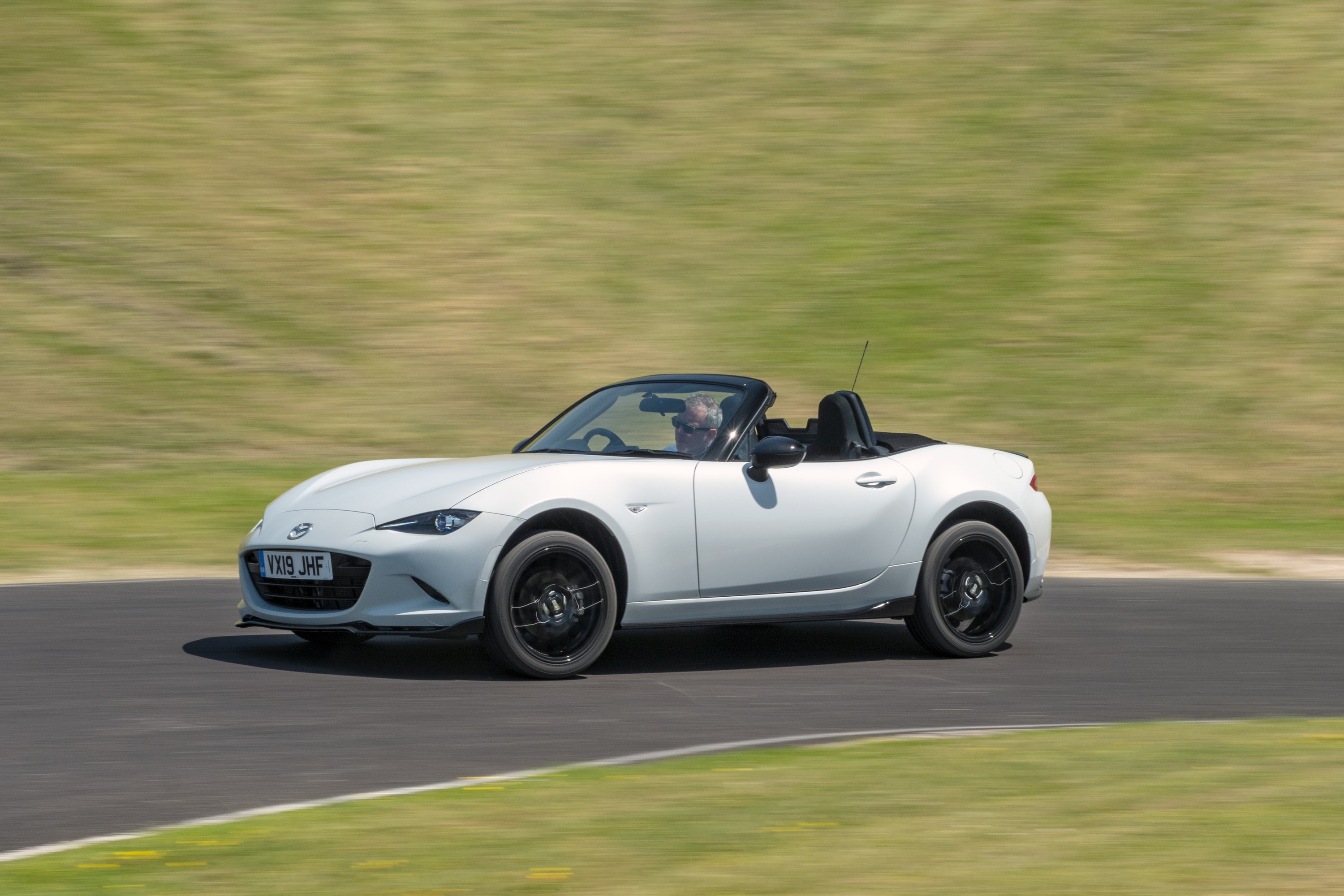 The tradeoff for that is a much stiffer ride which, in combination with the louder exhaust system, reduces refinement overall. It’s a tradeoff that very much comes down the personal preference, but the gains in driving feel are worth it — though the exhaust note does drone a lot at a cruise without really enhancing its tune at high revs.

Little has been changed in the way the car drives around town — remaining compact and easy to park — though it’s worth keeping in mind the lower springs will make it a little easier to fly under the radar in a sea of crossovers.

Equipped with the Design pack, the MX-5s exterior takes on previously-mentioned changes — though whether that enhances its appeal will come down to buyer’s preference on a sleeker look or a racier approach. 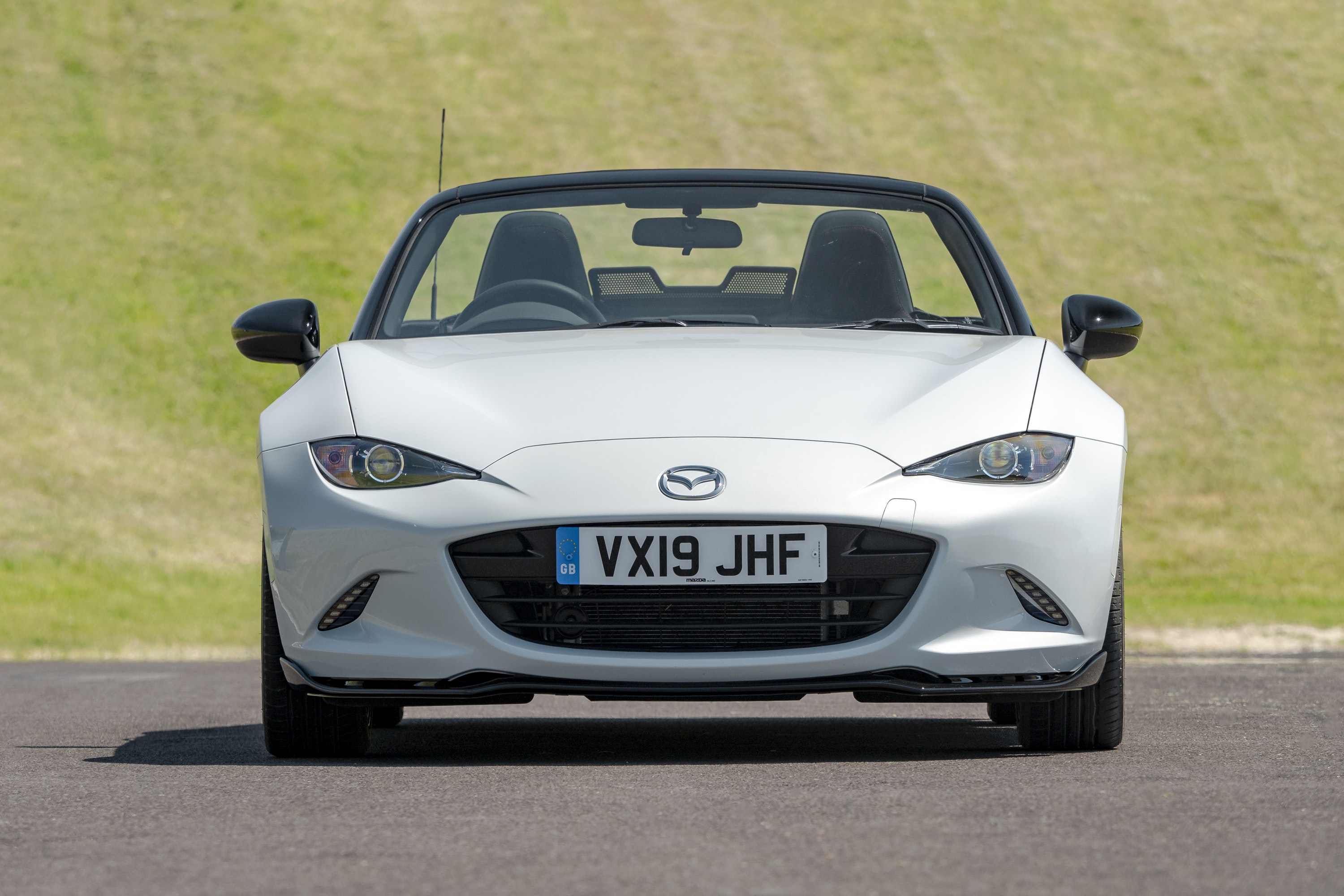 It’s certainly effective in making the car look a little meaner, though it’s still a far cry from a full-on race car-like bodykit that the aftermarket provides. At its price though, it’s hard to argue with the changes on offer though, especially as its OEM-status is unlikely to hinder resale value in the way third-party offerings may.

We’re particularly big fans of the addition of the BBS units which otherwise would cost close to the Cup pack in its entirety if bought elsewhere, though it’s worth reminding that these are limited to newer 2.0-litre cars.

The addition of Alcantara to areas of the cabin certainly gives a bit of a lift to the MX-5 — especially so for older examples with tatty-looking elements — but they remain minimal and we wouldn’t suggest going for the packs if your sole aim is to improve the cabin.

Typical MX-5 traits remain though, with good build quality and the use of decent materials throughout. Our test car also benefits from the addition of a reach-adjustable steering wheel, which particularly helps taller drivers get comfortable. 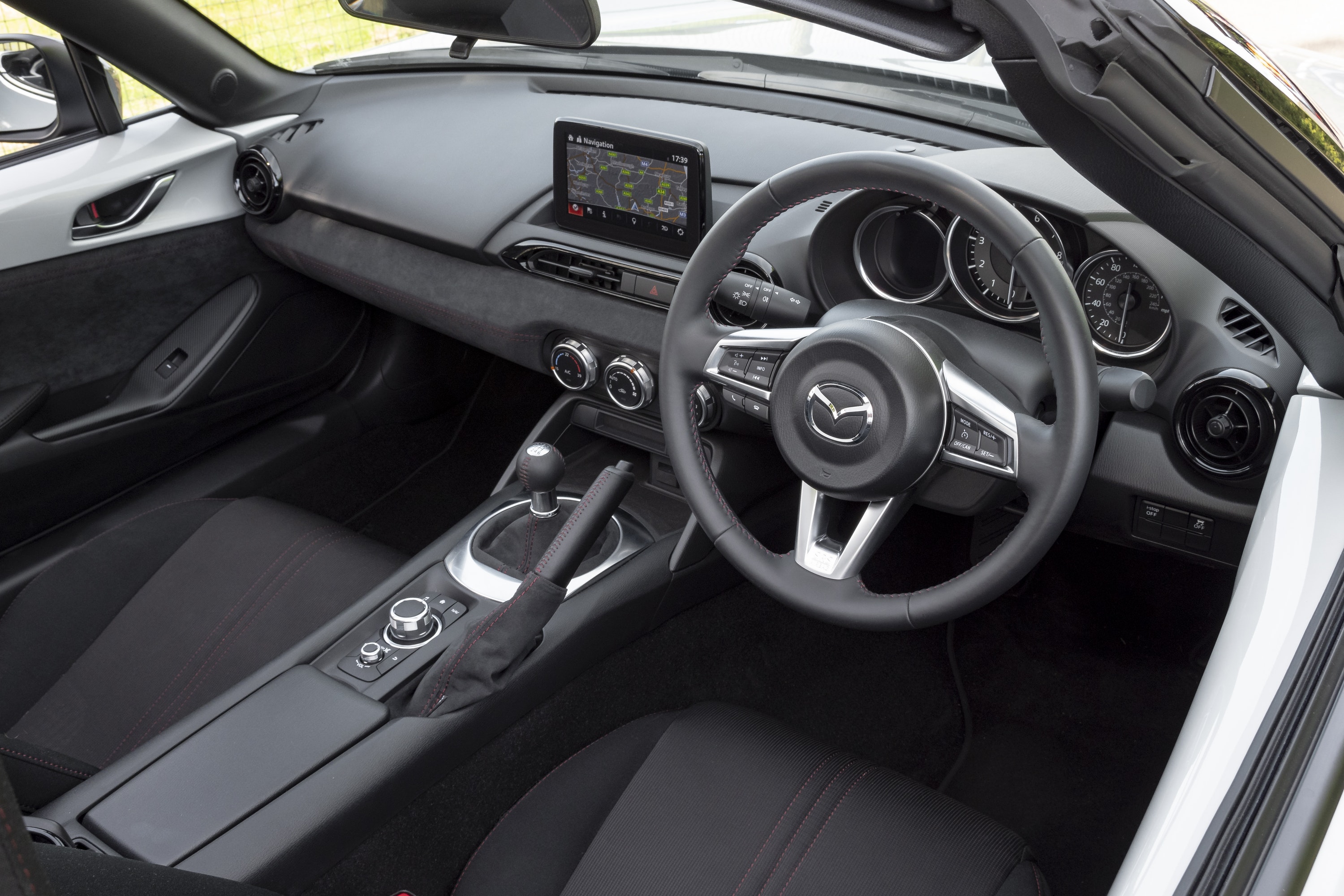 That said, those blessed with more height will likely find the Japanese roadster’s cabin a little too cramped and may be better off looking at the Toyota GT86 for a roomier sports car.

In terms of boot space, the MX-5 offers 130 litres. That’s enough for a weekend bag, but this is no practical machine — though we expect that doesn’t matter too much to buyers. There’s little in the way of interior storage too, with a cubby hole centered between the seats and two storage compartments hidden behind them.

Mazda is asking £1,995 for the Cup pack, which includes VAT and fitting, regardless of whether the car its being fitted to is fresh in the showroom or a customer-owned car. 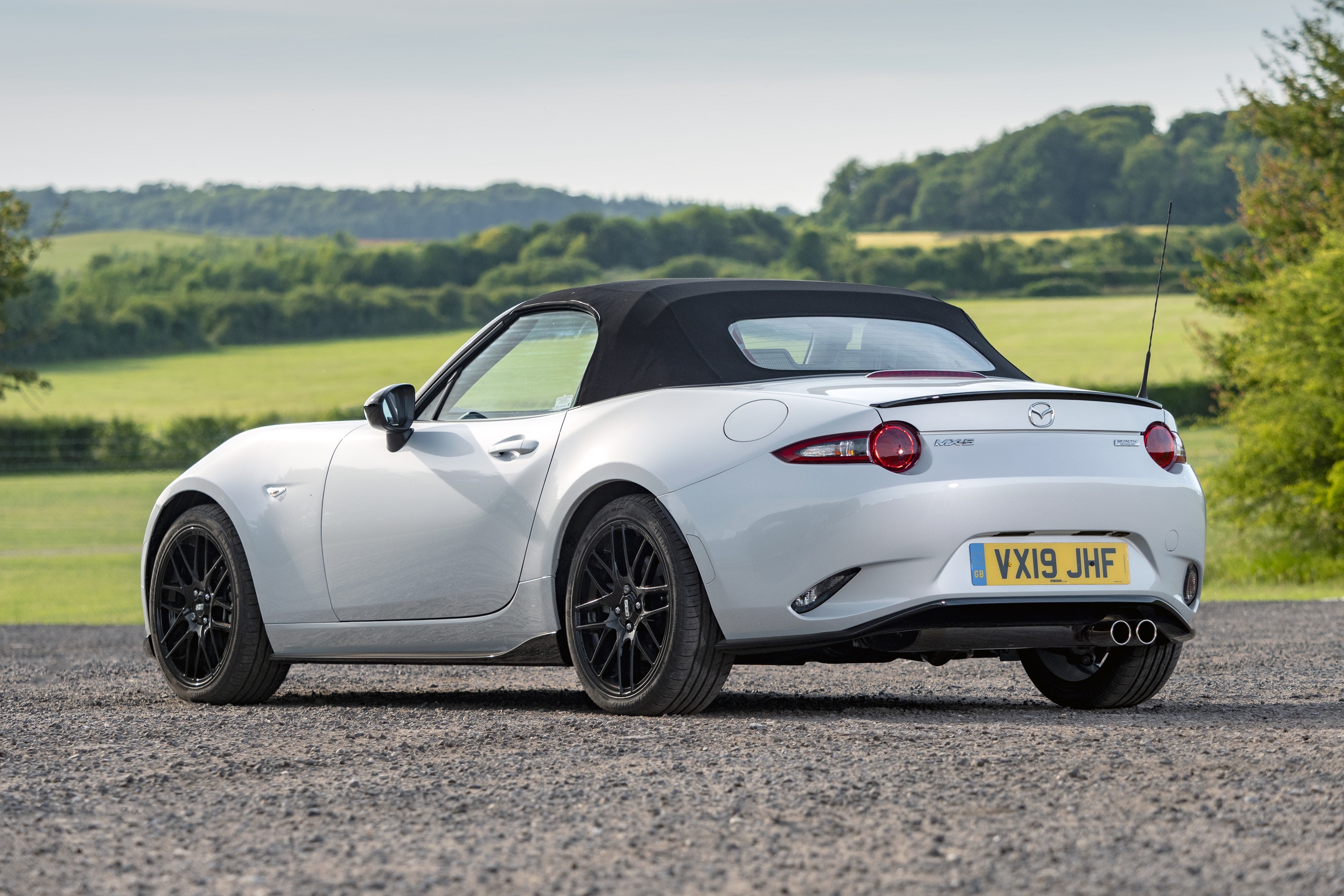 Those looking to upgrade to Design will have to fork over £4,675, also including VAT and fitting. For the sake of improving the driving experience, we’d recommend sticking with the Cup pack as it’s under the skin where the changes are most felt. If the enhanced looks appeal, then naturally the extra cost of Design is recommendable.

It’s worth remembering these upgrades won’t affect any manufacturer warranties or guarantees, which is seldom the case with aftermarket upgrades. Resale value will unlikely be affected, too.

Though the Mazda MX-5 is an impressive roadster, it has often fallen behind other budget sports car rivals in terms of driving dynamics and feel. That’s something the Design pack certainly fixes with its improved mechanicals, without the need to resort to the aftermarket. 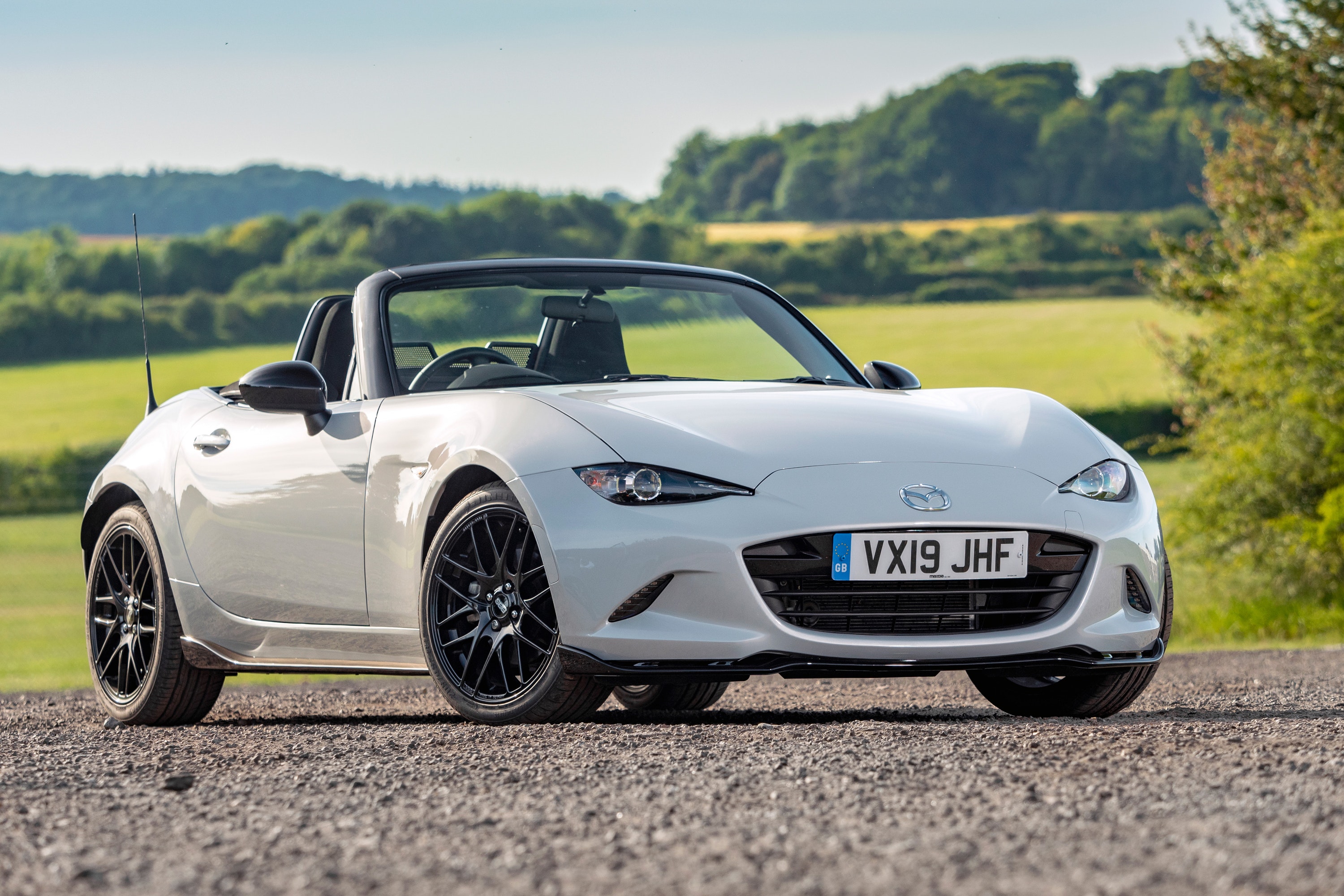 That’s the main sell of the option, which is all covered by the more affordable Cup pack — and that’s where our money would be going. Whether the visual tweaks are worth it come entirely down to preference.

The aftermarket may be able to bring more to the car, but for light upgrades that enhance the Mazda MX-5, the new packages offer a lot of value.