Jack Evans gets behind the wheel of Volvo’s range-topping, hybrid estate

Though electrification is being applied to cars for the city and urban environments, Volvo is keen to stress that big, heavy estate cars are just as ready for some battery-powered support as any. It’s why mild-hybrid technology is being applied across the firm’s range or, in the V90 T8’s case, full hybrid tech. We’re testing it out to see how a big estate car copes with a battery-electric powertrain and whether or not it detracts from the overall experience. 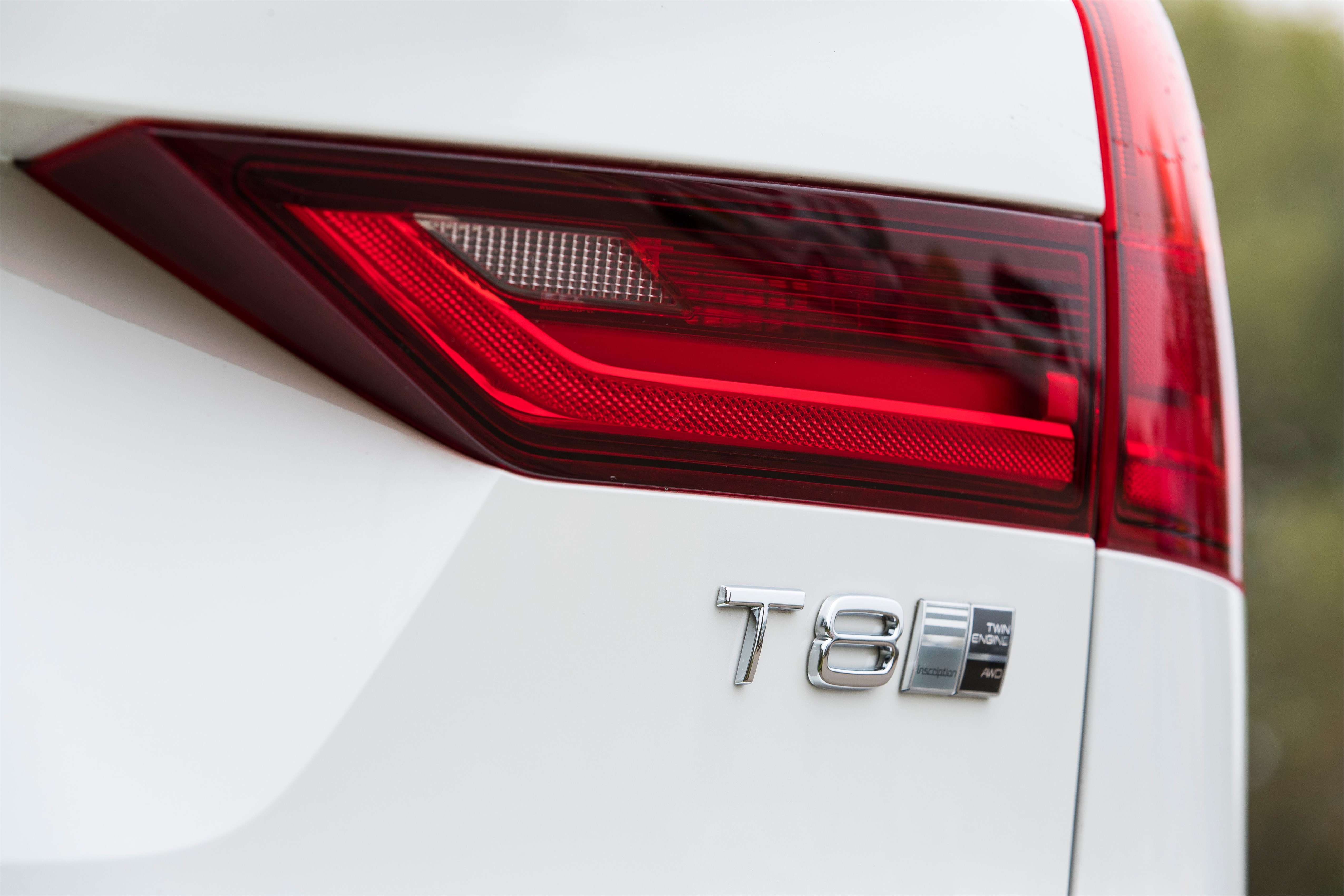 The biggest addition to the V90 experience, in this case at least, is that powertrain. It combines electric and petrol engines and motors – but we’ll take a look at that in a little more depth later on. Elsewhere, things are trademark Volvo – big proportions mean plenty of interior space, while the V90 has been designed to deliver the hushed, refined driving experience that you’d expect from one of the Swedish firm’s products.

A suite of driver assistance systems has been fitted too, along with plenty of in-car tech, all of which helps to make the T8 feel as up to date as possible.

The V90 T8 uses a twin-motor setup; up front, there’s a 2.0-litre turbocharged petrol engine driving the front wheels, while an electric motor and battery combination power the rear wheels – when charged, of course. Volvo claims that you should be able to travel up to 28 miles on electric power alone when fully charged, and charging is done via a port on the opposite side of the car to the conventional filler cap. 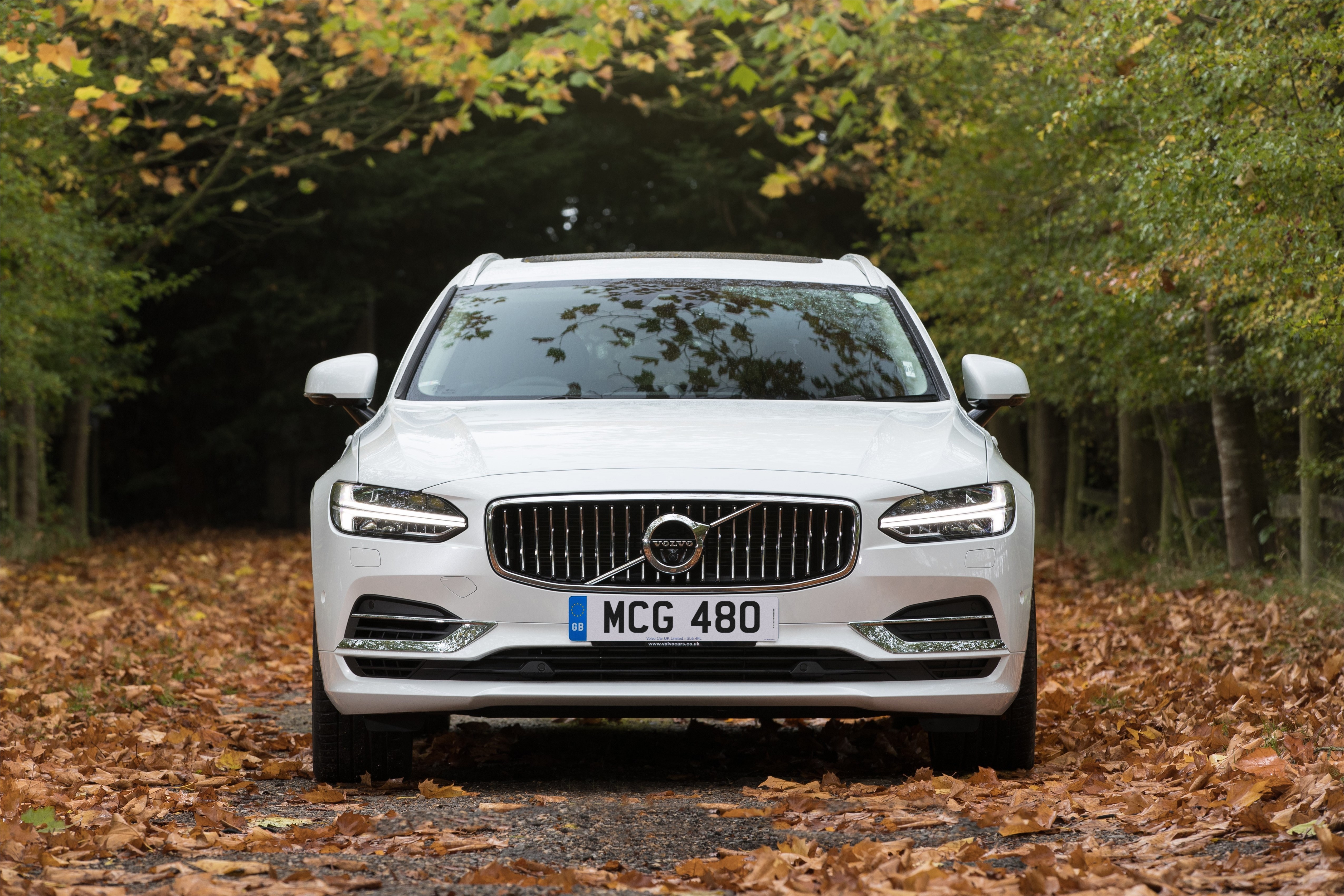 Volvo says you should be able to see as high as 117mpg, but of course this is an extreme – a figure of over 85 will be more achievable when fully charged. However, expect to see that figure fall considerably when all the electricity has gone and you’re running on petrol power alone.

Setting off under electric power means that low-speed driving is serene and refined in the T8; power delivery is smooth and around town you rarely need to trouble the petrol engine. In fact, keep the batteries topped up and there’s little reason why, for shorter trips, you’ll need to use any fuel at all. 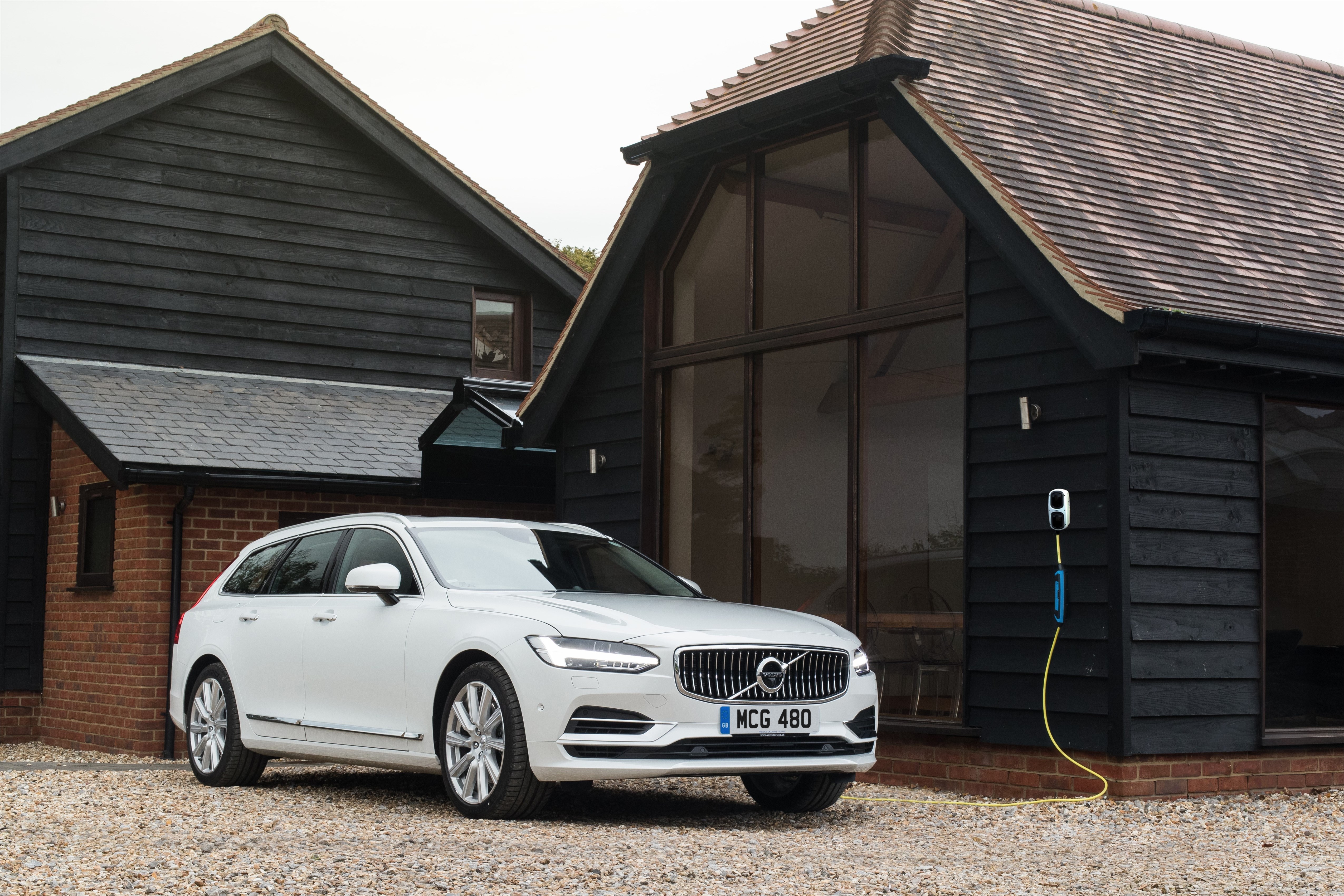 Out on the motorway things are just as refined for the most part, and once you’re out of energy the 2.0-litre engine isn’t too vocal. It’s just at these higher speeds, and when out of charge, that the car’s consumption figure plummets – which means this is one Volvo estate which isn’t quite as adept at longer distances, in the economy stakes at least.

Sleek, refined and surprisingly elegant for such a large vehicle, the V90 looks great in the metal. Volvo has managed to bring its traditionally slab-sided estate cars into the modern age and the V90 is a particularly well-rounded example of this. The ‘Thor’s Hammer’ headlights feature loud and proud up front, while a variety of creases and lines help to disguise the car’s big proportions.

Our test car even rode on 20-inch alloy wheels, which we imagine would’ve had the classic Volvo owner of the 1980s taken aback. But on the V90 they look almost acceptable – if perhaps a little large – which goes to show just how far Volvo’s design has moved forward.

The V90’s interior matches the minimalist yet elegant design of the exterior. Our test car featured open wood trim which looked excellent, matched against some gloss black plastic trim pieces and plenty of leather. There are acres of space for those sat up front too, with a large windscreen providing plenty of visibility out front. 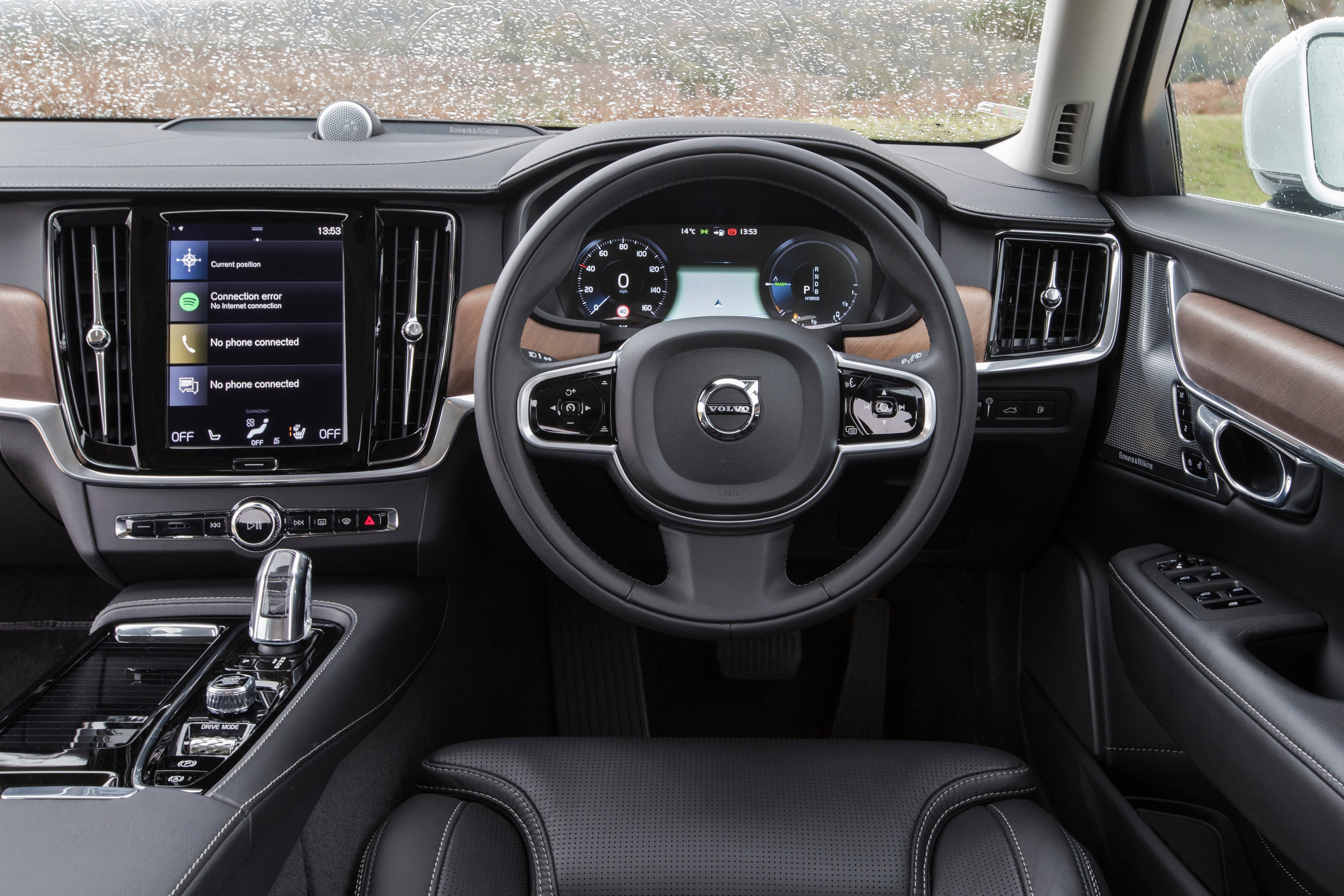 There’s a good amount of room for those in the back too, while the boot is, sadly, a bit behind what you’d expect from Volvo. The 560 litres of seats-up space you get is decent enough but drop the rear seats and the 1,526 litres of room lags behind rivals such as the BMW 5 Series Touring and Audi A6 Avant. It falls far behind the likes of the Skoda Superb Estate too, which offers up to 1,950 litres.

There’s loads of onboard tech available in the V90. Our test car came in Inscription trim – the highest specification available – which sees features such as a 12-inch driver display, adaptive LED headlights and walnut wood inlays all fitted as standard. And, though the 20-inch alloy wheels fitted to our test car were optional extras, the standard Inscription car still benefits from 19-inch diamond-cut units. 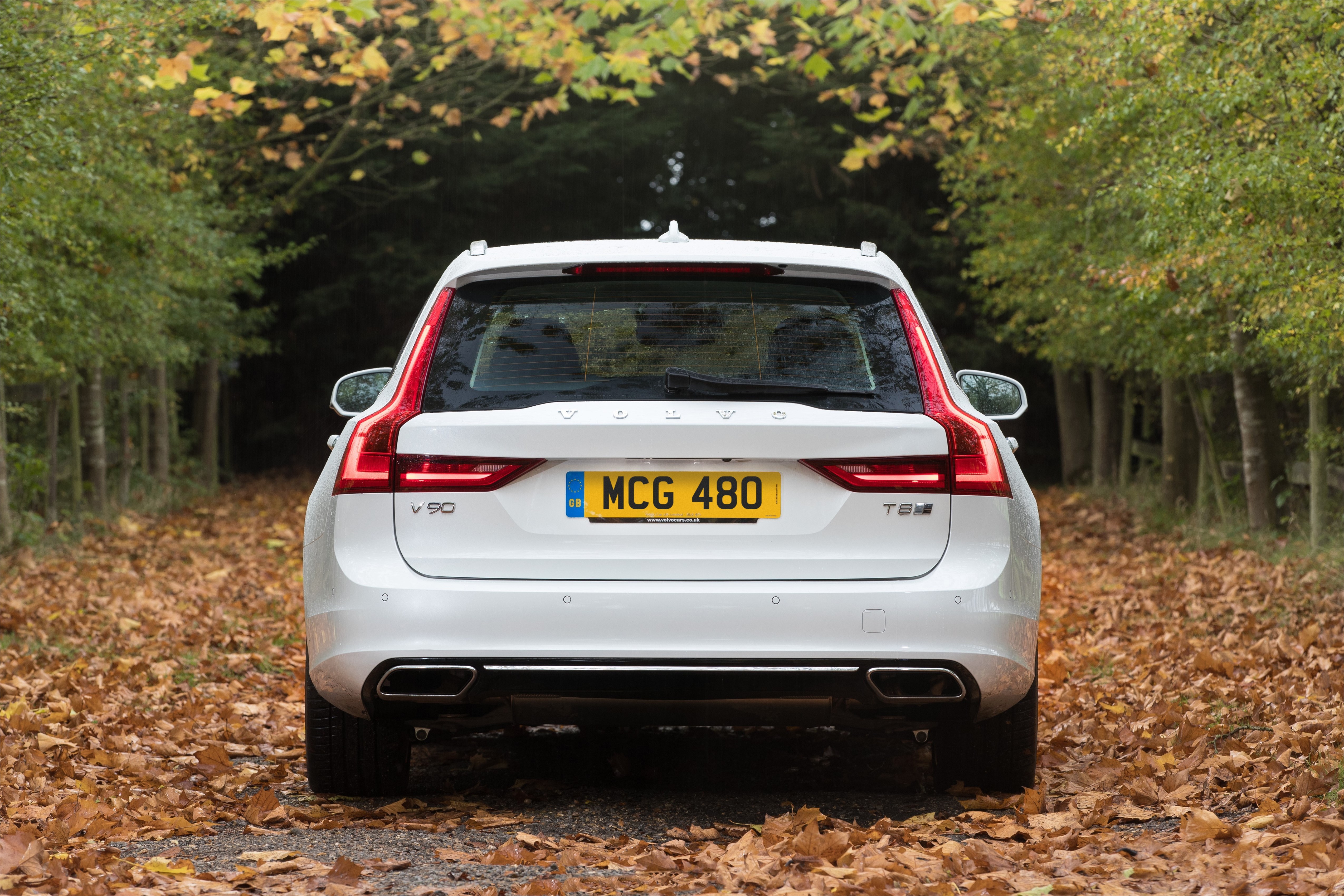 The main infotainment setup remains one of the best around thanks to its easy to navigate menus and responsive screen. You get Apple CarPlay and Android Auto smartphone connectivity too, albeit as part of the £3,000 Bowers and Wilkins packs which also adds a premium sound system. Given that most other manufacturers are now offering these smartphone packs as standard, this seems a little steep.

Though others have arrived on the market since its release, the Volvo V90 remains one of the best estate cars on sale today. Particularly, in this T8 hybrid setup, it’s a more attractive proposition than ever owing to its lower running costs and improved emissions. It’s expensive – we’ll make no bones about that – but for those after a luxurious and refined estate car for all occasions, then the T8 will warrant the extra cost.