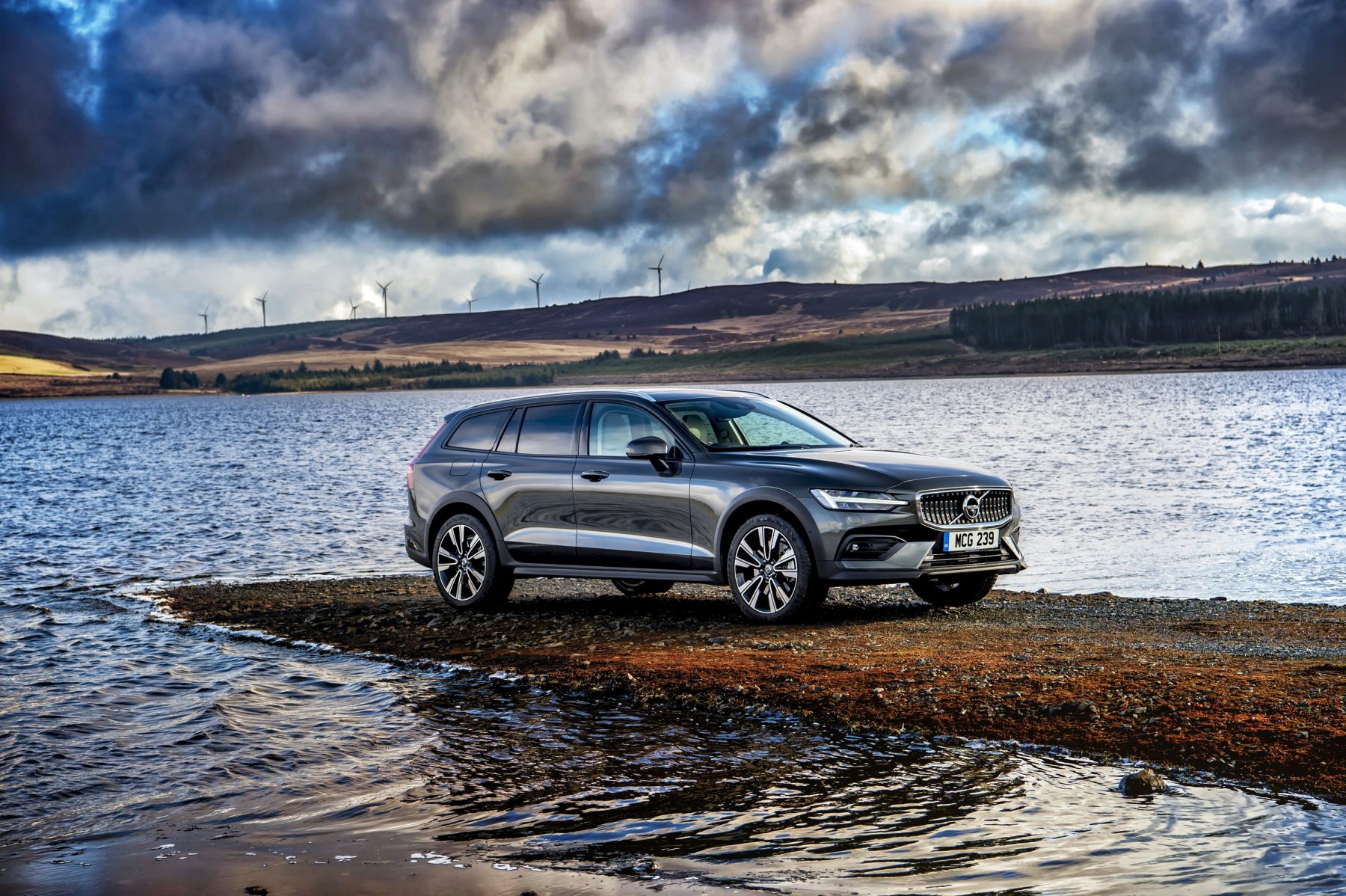 We’re testing the Volvo V60 Cross Country, lets see what it has to offer.

Volvo’s ‘Cross Country’ range of machinery has become well established in the hall of niche car segments since the first arrived as a variant of the V70 in 1998. Since then, the road car-turned-soft-roader trim has appeared on a number of machines, and the newest incarnation of the V60 is the latest to benefit.

Available in the UK exclusively with a diesel engine, it’s something of a landmark moment for Volvo too — becoming the final diesel model to launch as the Swedish firm gears up its push to a cleaner powertrain line-up.

Last year saw the introduction of an all-new V60, with Cross Country coming alongside the more style-oriented R-Line to make the range more comprehensive.

What does this particular trim bring to the table, then? Well, not a lot more to be honest — rather tweaking the compact estate’s elegant formula rather than revolutionising it. That said, it is the first of the second-generation V60’s all-wheel-drive offerings, while also bringing plastic bodywork additions for a more rugged look alongside functional features such as an off-road driving mode, Hill Descent Control and a raised ride height.

Powering the V60 Cross Country is the last ever diesel engine to launch in a new Volvo model. This ‘D4’ unit produces 187bhp and 400Nm of torque, sent to all four wheels via an eight-speed automatic gearbox. As a result, 0-60mph comes in 7.7 seconds with a top speed of 137mph possible. As for efficiency, Volvo claims it can return 42.8mpg on the combined cycle with CO2 emissions of 143g/km. 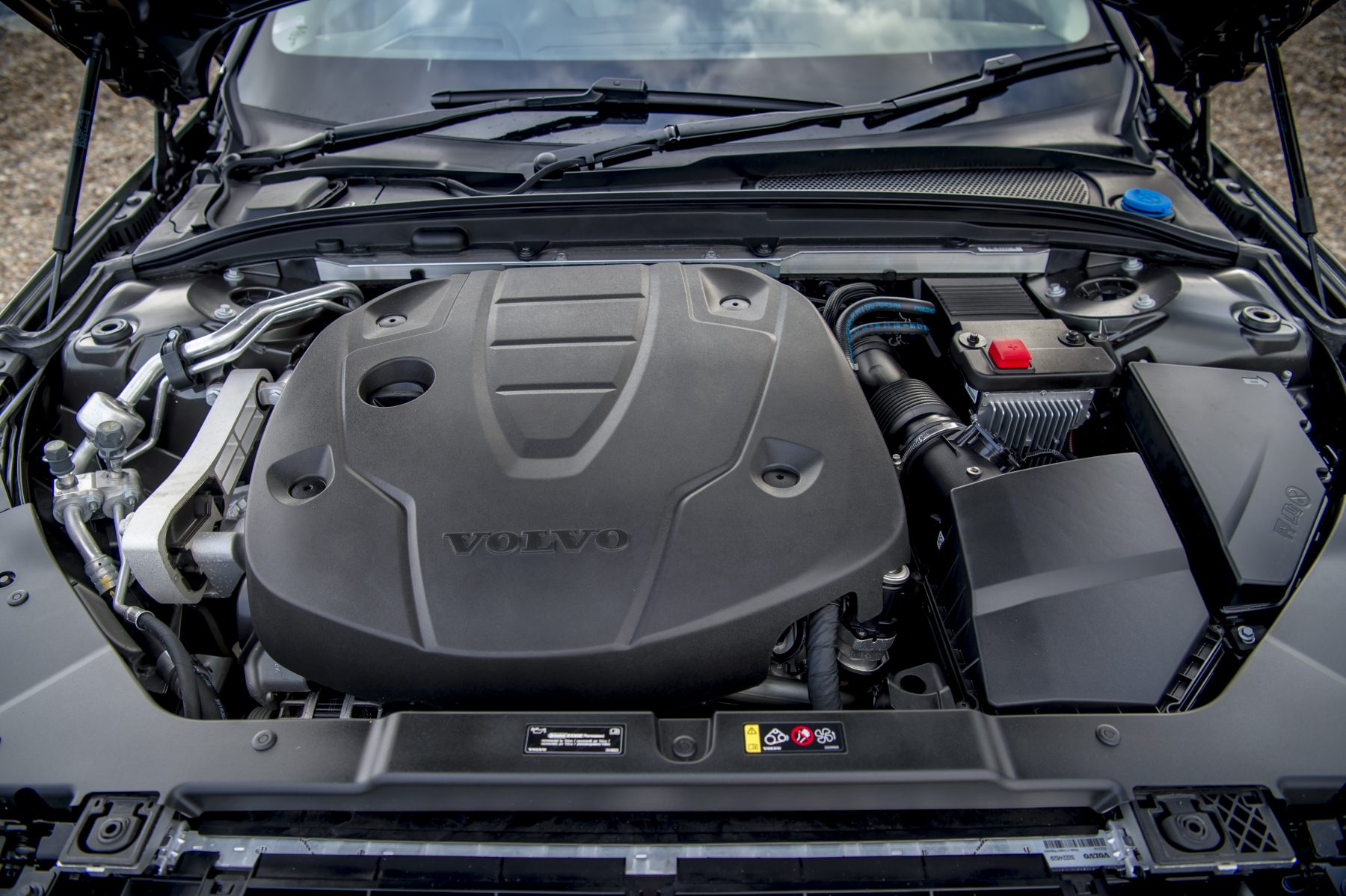 The powertrain is one of the smoothest out there, with torque delivery not particularly sharp but rather spread well over a wide rev range, while the automatic gearbox is swift enough in its changes for a cruise. As long as you don’t expect much in the way of inspired driving from the unit, there’s joy to be had.

Much like its powertrain, the overall drive of the Cross Country is best suited to soaking up mile after mile in one fell swoop. The ride is supple, all-round refinement is amongst the best in its class and it’s just a joy to spend a lot of time in. 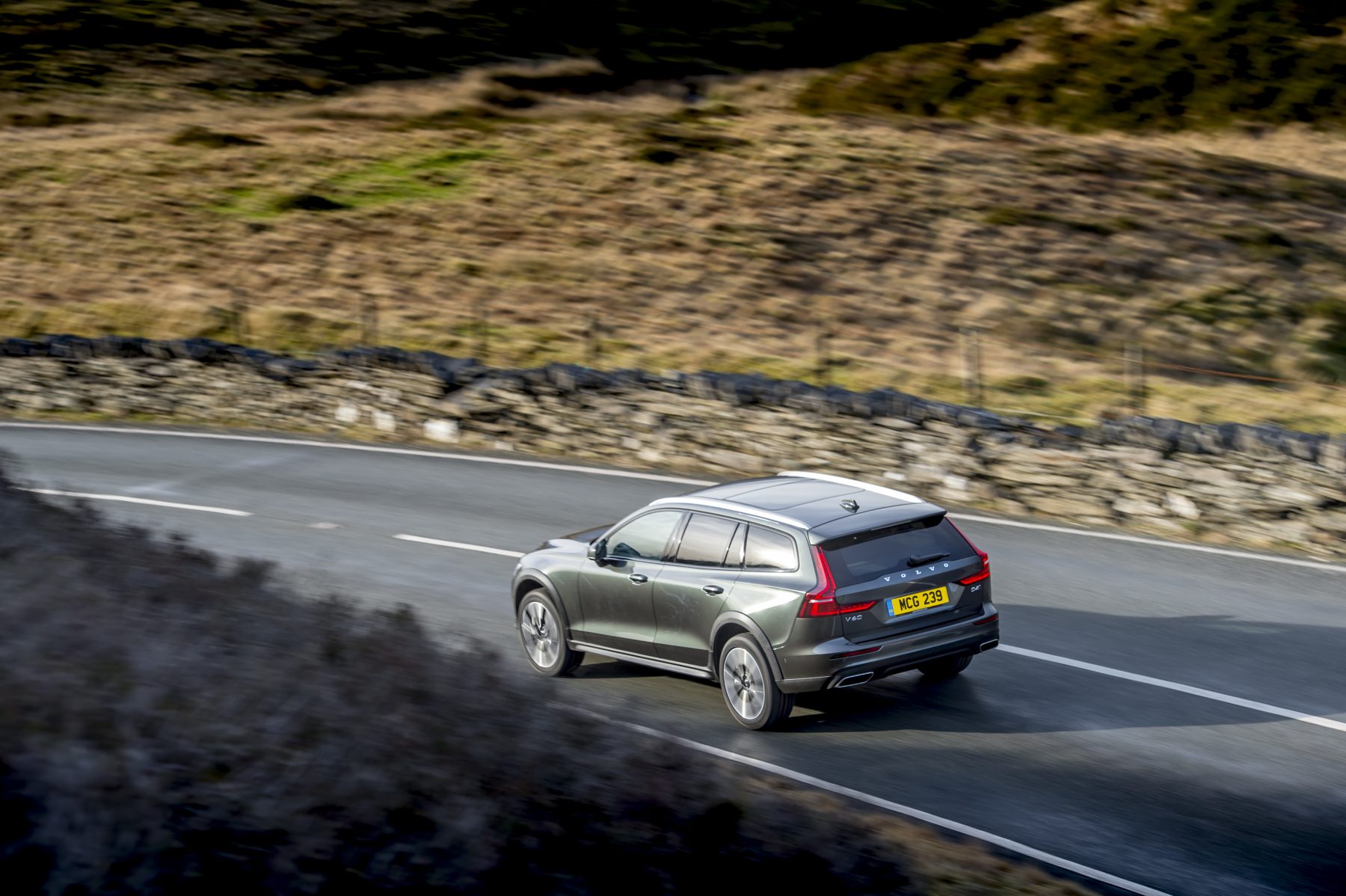 While that is also true of the regular V60 range, the CC, of course, has another trick up its arsenal — its off-roading ability. Now, we’re not going to claim it’s any Land Rover Defender competitor, so don’t think it’ll tackle a rainforest with ease. But for crossing light fields and some slightly more challenging boggy roads, it delivers. In off-road mode, gears are held on to longer for increased driver involvement and its Hill Descent Control acts impressively.

Despite its more rugged agenda, the V60 Cross Country only has minor aesthetic hints at its capabilities — much like those models before it. The regular V60 design is present, with the simple addition of plastic cladding and a raised ride height for a tougher appearance.

It’s a good blend of capable and classy to our eyes. Volvo’s current corporate designs is one of the best out there at the moment, and the V60 has only heightened that — so it’s good to see it remain intact in CC form.

Volvo has kept the V60’s interior identical as well for the Cross Country — there’s no indication you’re in a machine designed for the rugged stuff. That’s not a bad thing — with a plethora of leather and soft-touch materials deployed in the cabin. 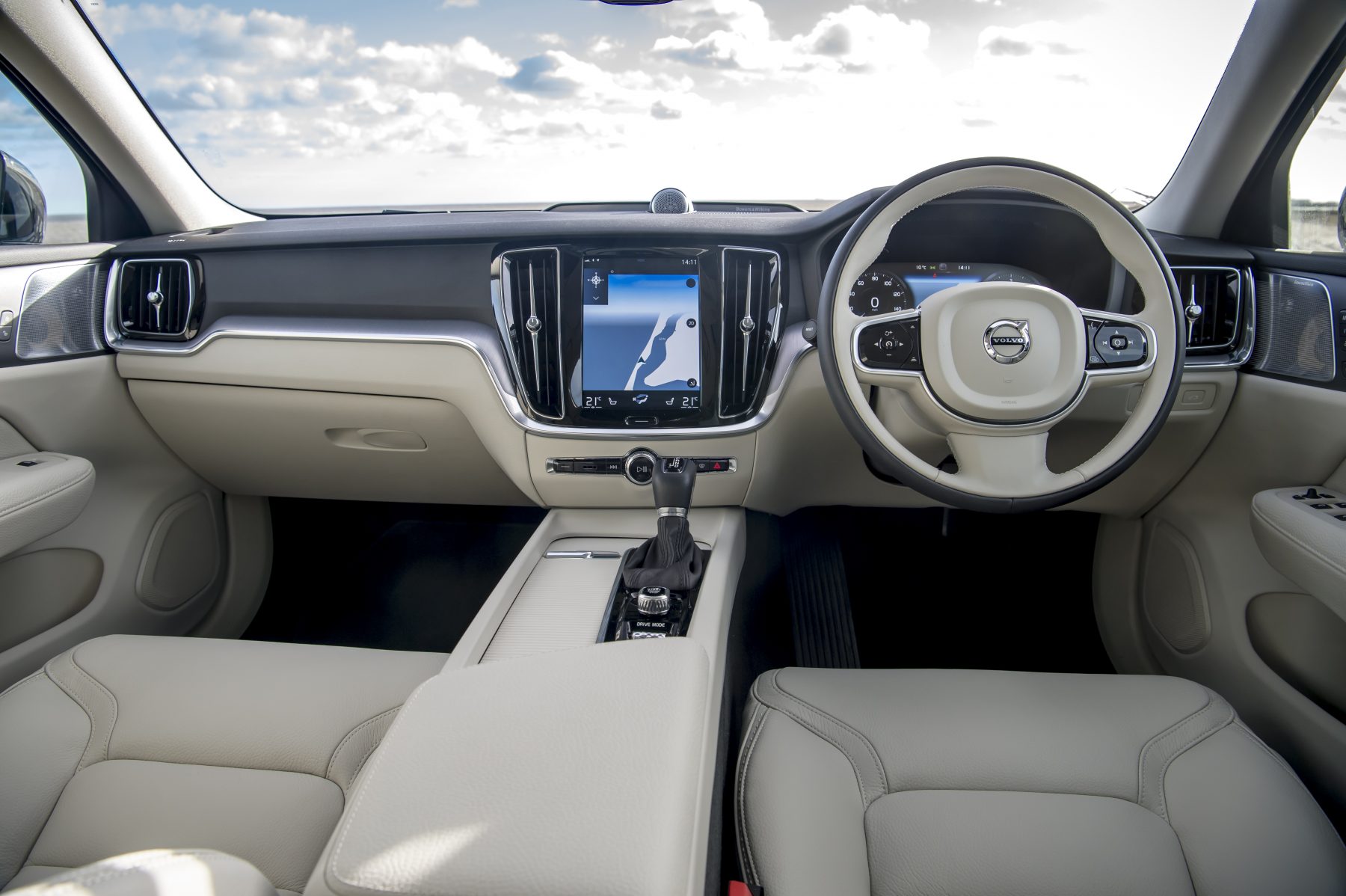 The ergonomics of the cabin are impressive too. Controls fall neatly to hand while incorporating toggle switches within the infotainment system for safety features means there’s no need to wave your hands around the steering column looking blindly for the right button.

As for space, five can be seated comfortably while its boot capacity comes in at a class-leading 529 litres. Compare that with 505 for the Audi A4 Allroad and 495 in the outgoing BMW 3 Series Touring, and it seems generous. 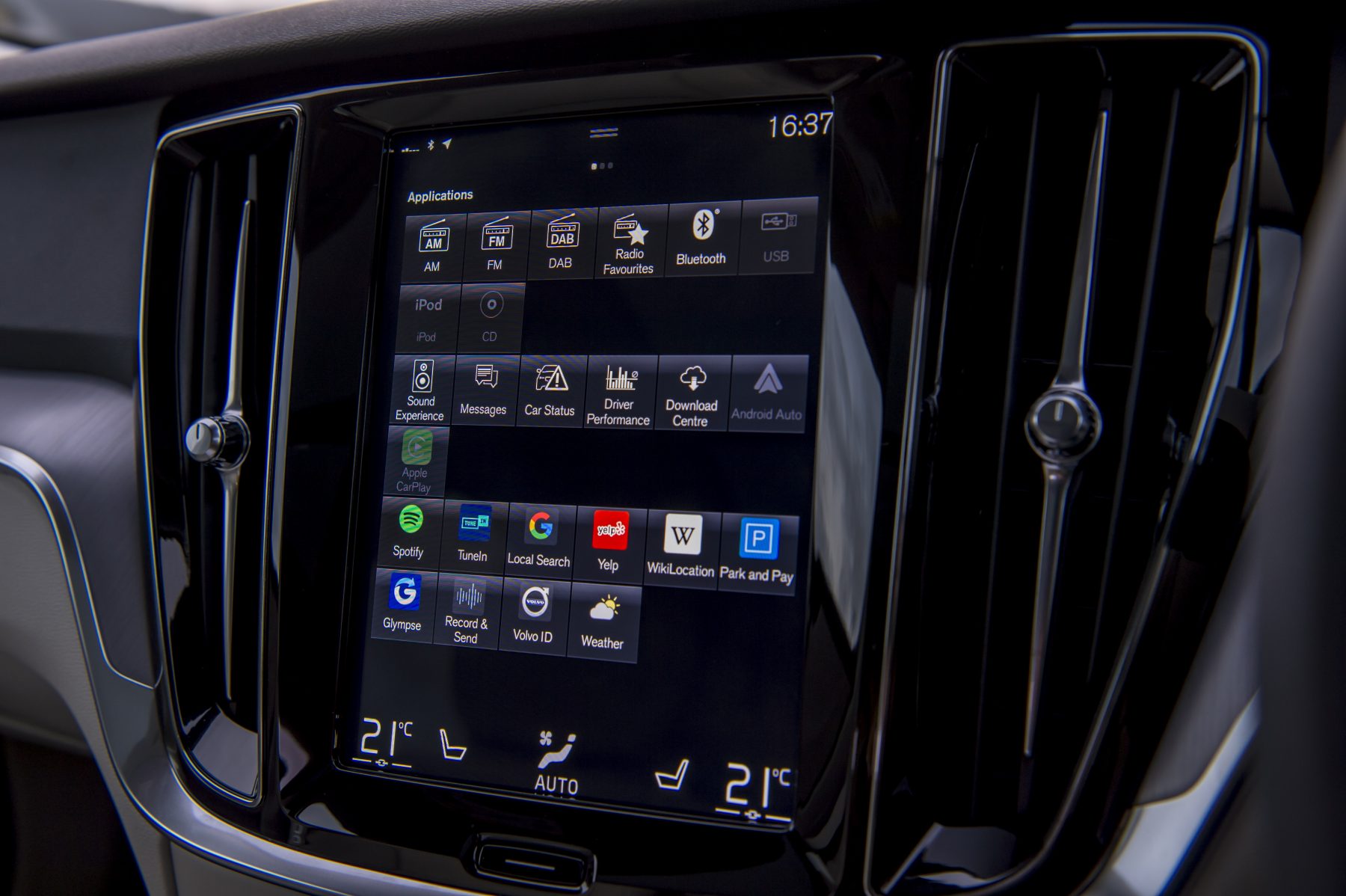 It’s hard to argue with the pricing — this is, after all, a premium car, and remains in the ballpark of its closest competitor, the Audi A4 Allroad. That said, an equivalent Momentum Pro V60 can be had from £37,120, which makes it hard to suggest the Cross Country unless you’re planning to consistently head down rugged paths.

The Volvo V60 Cross Country only builds further on an already very good car. Its additions haven’t spoilt the comfortable, refined experience of the compact estate – only enhancing it with some off-road ability and a tweaked look.

That said, with a slightly higher price point than Momentum Pro models with a similar specification, it doesn’t leap out of the range as a recommendable model — and is only really a necessary consideration if its ability to take on some more rugged roads is a requirement.