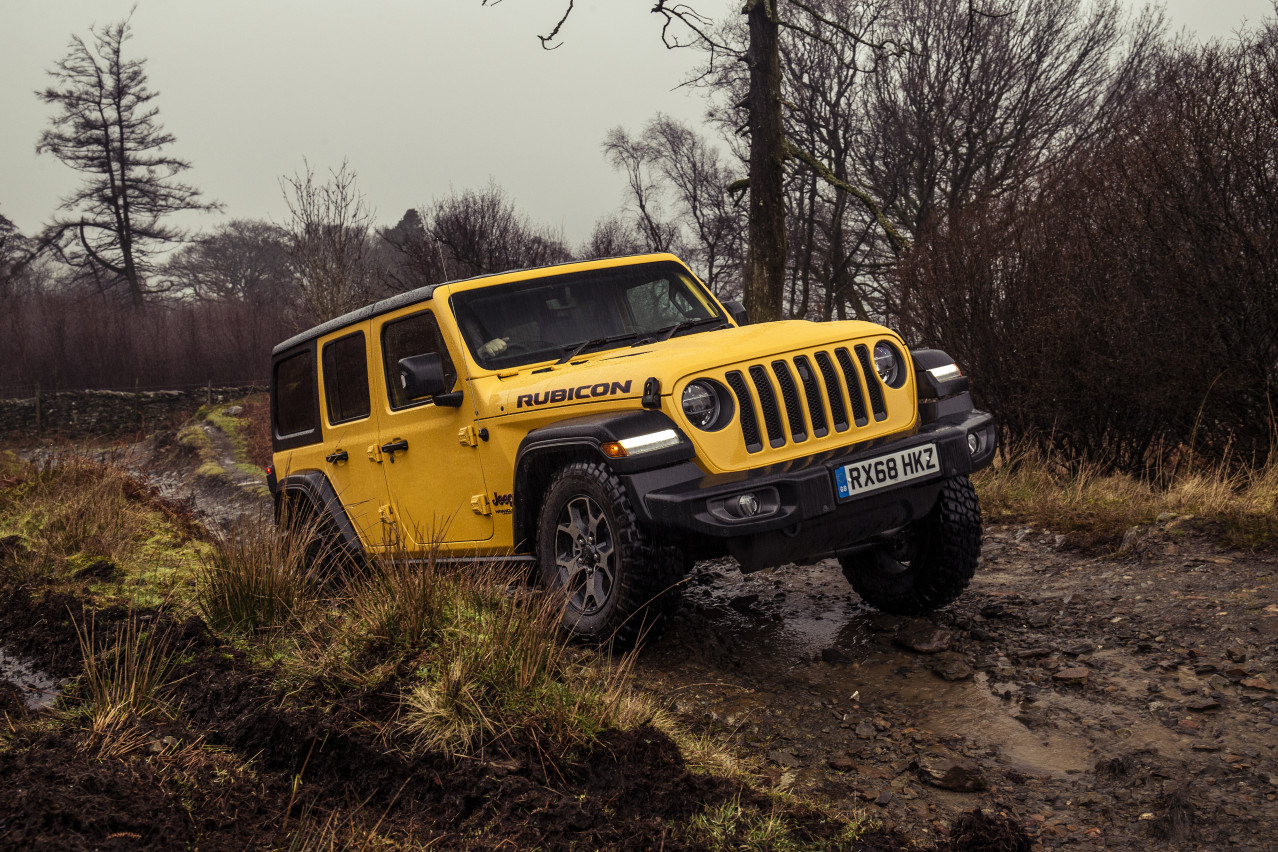 The Wrangler is a no-nonsense bruiser of an off-road vehicle, The fourth-generation Wrangler is both larger and lighter than the car it replaces.

Few vehicles are as recognisable as the Jeep Wrangler – it harks back to the Willys MB of 1941, giving it more heritage than even the Land Rover Defender. Like the Defender, the Wrangler is a no-nonsense bruiser of an off-road vehicle, but unlike the Defender, you can actually buy one new. 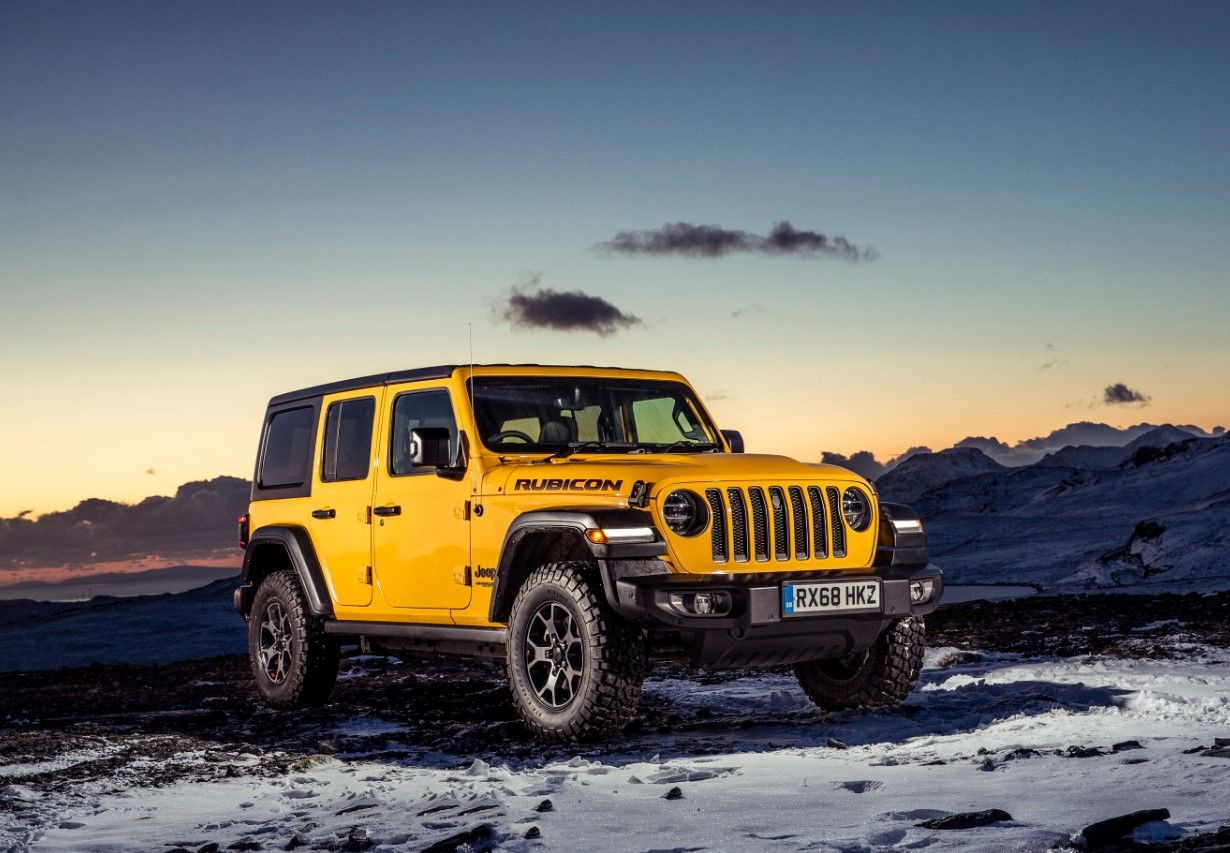 For 2019, the Wrangler’s been made more suitable for tarmac while retaining its core sense of purposefulness. After all, Jeep says that customers who want a Wrangler will only buy a Wrangler – and they’re a choosy bunch indeed.

The Wrangler rides on a new platform that’s both bigger and lighter than its predecessor. That’s not to say it’s gone all lightweight and fluffy – this is still a two-tonne-plus car – but it does liberate a little more interior room and make for a more nimble experience on the road. 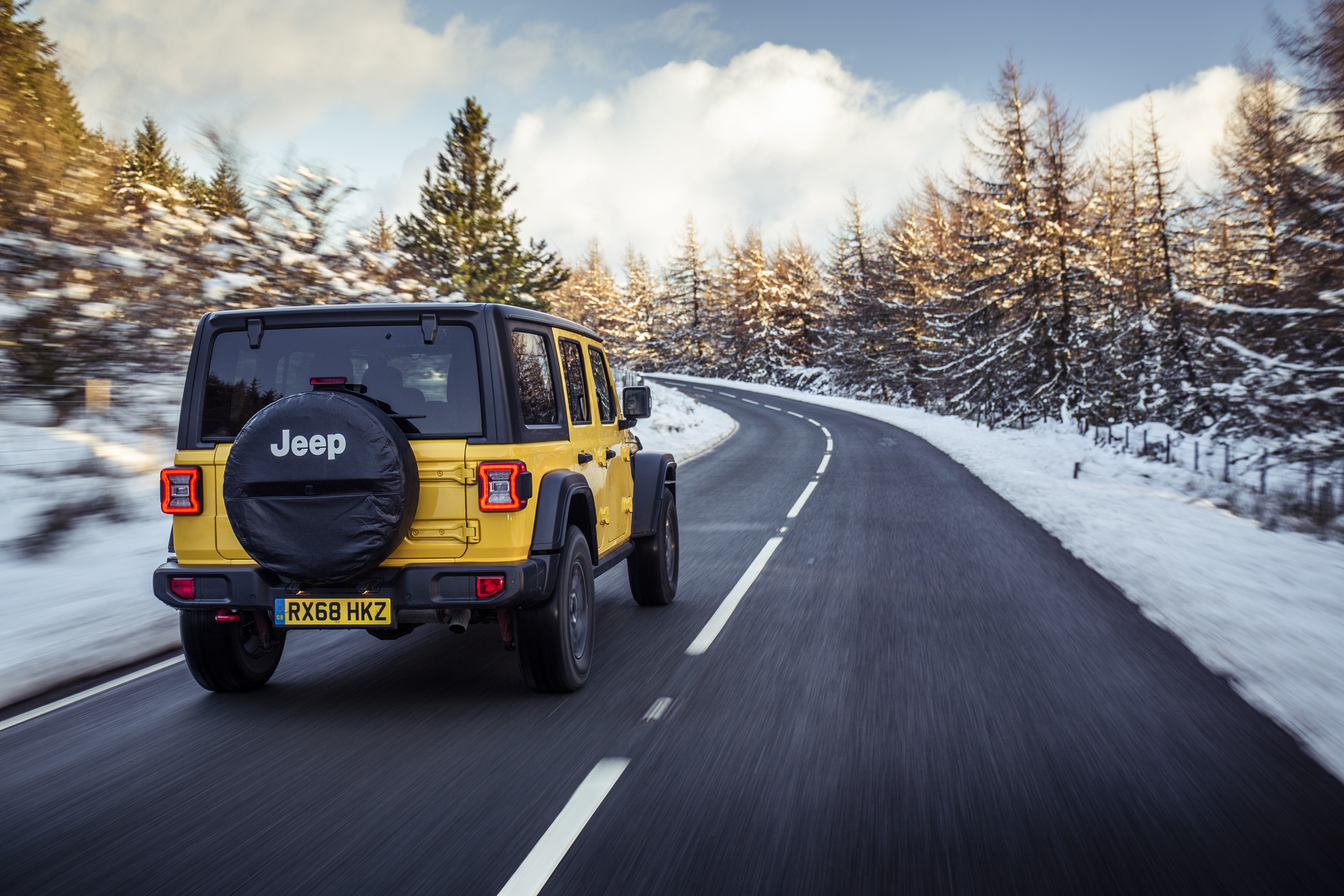 Under the bonnet are a pair of new four-cylinder engines, a petrol and a diesel, and both have seen a decrease in capacity but an increase in efficiency. Jeep says that critics from various owners’ clubs bemoaned the loss of the 3.6-litre V6 until they drove the new 2.0-litre petrol – high praise indeed.

The off-road gear is near enough as you’d expect, but the interior, technology and safety kit have all been given a boost. As for the styling, it’s classic Jeep but with a few more nods to modernity.

The old 3.6-litre V6 petrol and 2.8-litre diesel have been replaced with a 2.0-litre and a 2.2-litre respectively – both four-cylinder turbocharged units. The 268bhp petrol is our pick of the pair. It’s smooth, more refined than the diesel and shouldn’t suffer much in terms of real-world efficiency. Surprisingly, it’s also got slightly lower CO2 emissions.

That’s not to say the diesel is bad, and its low-down pulling power may appeal to some. Both engines are paired with an eight-speed automatic gearbox – best described as ‘fine’ – and selectable 4WD. That’s selectable by a great big lever by the handbrake, by the way – no puny little rotary knobs here.

Hard-core Rubicon models feature a whole host of off-road kit too, including locking differentials, an anti-roll bar that can be electronically disconnected for greater suspension travel and chunky off-road tyres.

On the road, previous Wranglers have suffered from a bouncy ride and vague steering – much like a Land Rover Defender. This new model is a big improvement, and while it’s certainly not up to the standards of a Land Rover Discovery, it’s now a vehicle you could conceivably take on a long trip. 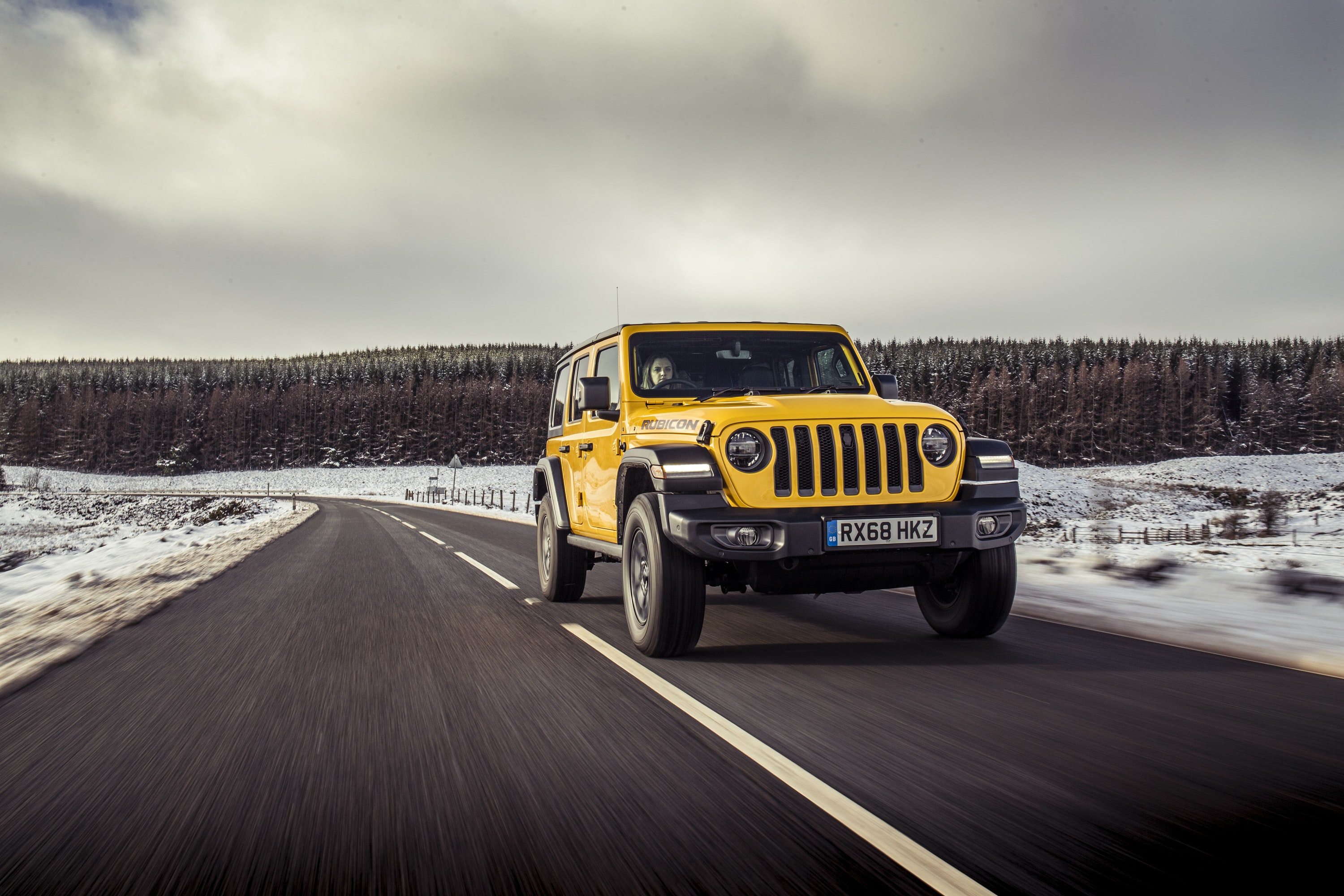 The steering is over-light but not too vague, while the ride is passable and aided by very comfortable front seats. Push it too hard on tarmac and the Wrangler will get out of shape fairly quickly, with plenty of body lean – but owners aren’t really too bothered about that, and at more sedate speeds the Wrangler isn’t too offensive at all.

Off road is where it excels, though, and round our challenging Lake District test route even models on road tyres never felt like they were struggling. It’s easily the equal of legendary badges such as the Toyota Land Cruiser and Range Rover.

Even if you were unfamiliar with the Wrangler name you’d instantly be able to identify the new model as a Jeep – thanks in part to extensive badging but mainly because of its classic design features. The seven-slot grille and circular headlights (now LED units across the range) give the front end an instantly recognisable ‘face’, while the tailgate-mounted spare wheel, standard soft-top and trapezoidal wheel arches are all welcome touches too. 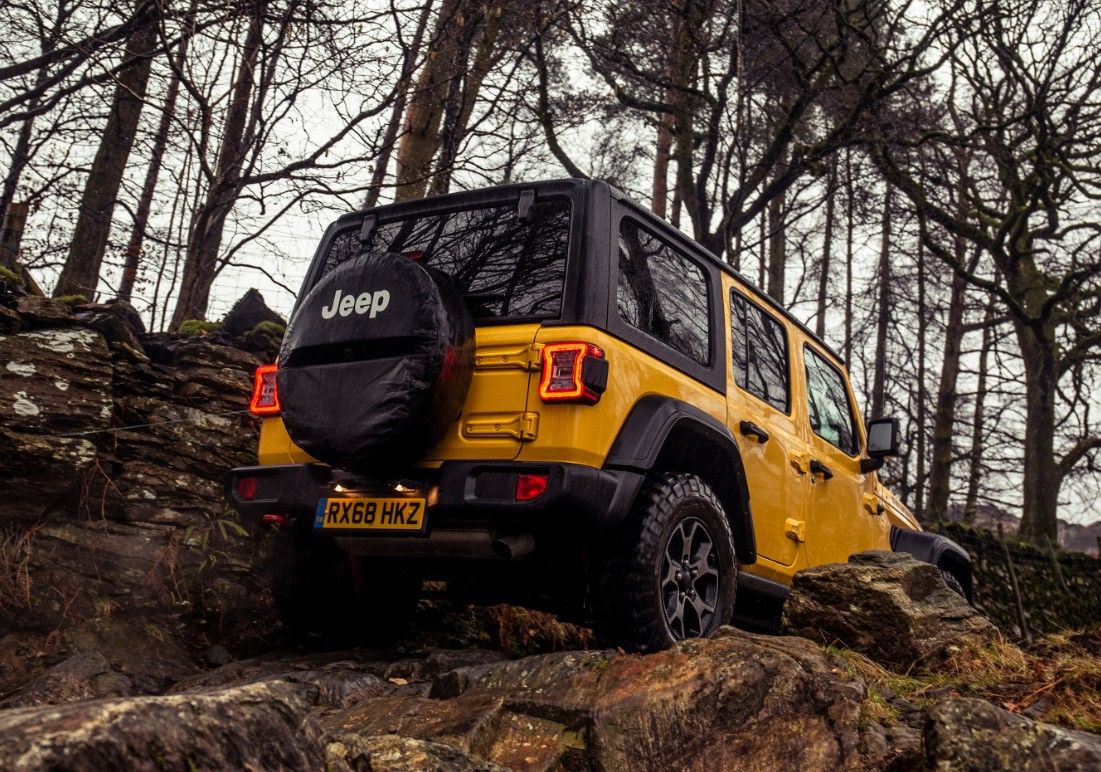 With their black roof panels, off-road tyres and decal packs, the Rubicon models are the most eye-catching, and certainly the ones that will appeal most to traditional Jeep customers. Overall, the Wrangler has a rugged charm that’s impossible to ignore – equal parts purposeful and lovable.

There are definitely a few niggles with the Wrangler’s interior. First, the driver’s footwell suffers serious intrusion from the centre console, leaving nowhere for your left foot. You’ll have to either sit it underneath the brake pedal or fold your left leg uncomfortably under your right.

The infotainment, while fully featured, is still the same disappointing Fiat system you’ll find across the Jeep range – so it’s awkward and low quality in places, and not really up to scratch for a car of this price. 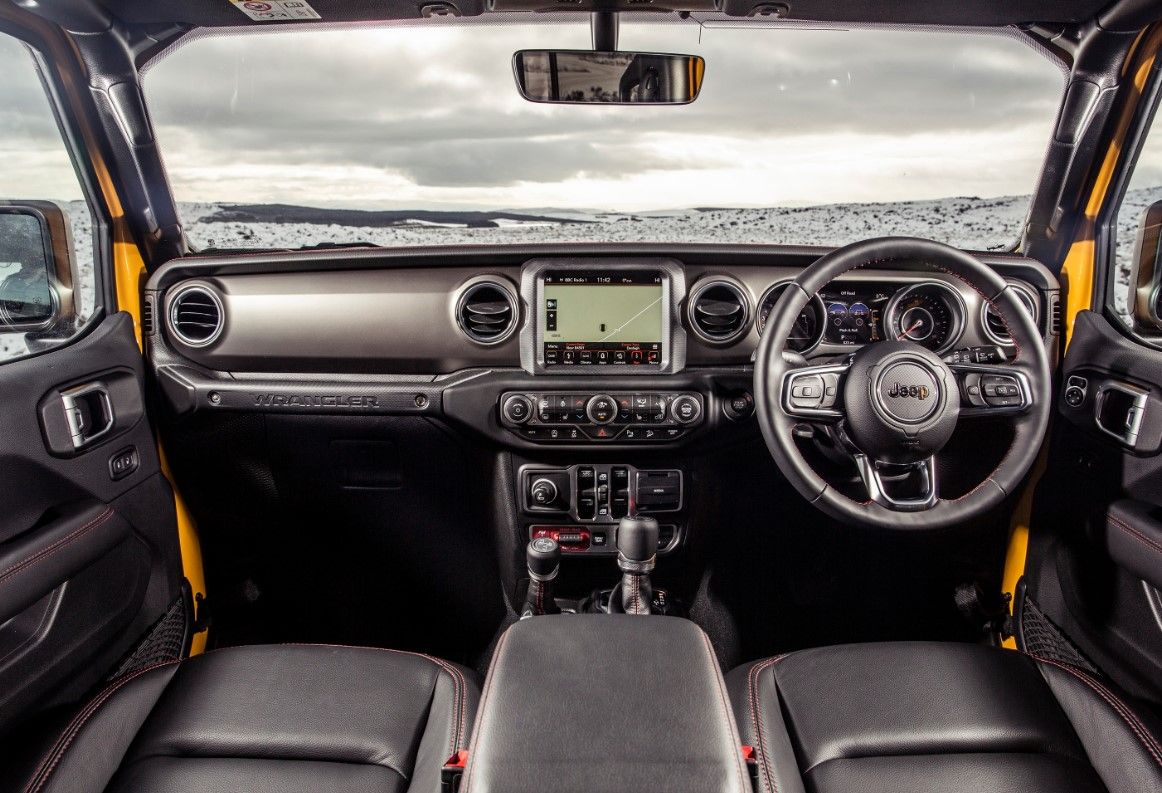 The styling, however, is excellent. The flat-faced dashboard is a charming throwback, and it’s decked out with little Jeep details. Most of the switches feel high quality, and even having the window switches centre-mounted isn’t an issue. The glovebox is a little stingy, but there are two large cupholders and a cavernous centre storage compartment.

Rear passenger space, meanwhile, is decent even on three-door models. Your guests won’t be riding in luxury, but they’ll have plenty of room for short journeys – and there’s even a good-sized boot.

There are three trim levels available. Entry-level Sahara features most of what you’d expect, including an eight-inch touchscreen infotainment display, climate and cruise control, Apple CarPlay and Android Auto plus all-round LED lights.

It’s hard to imagine why you wouldn’t pay a mere £2,000 extra and opt for Rubicon, though. These models get a host of styling and equipment upgrades, including that brilliant extra off-road gear. 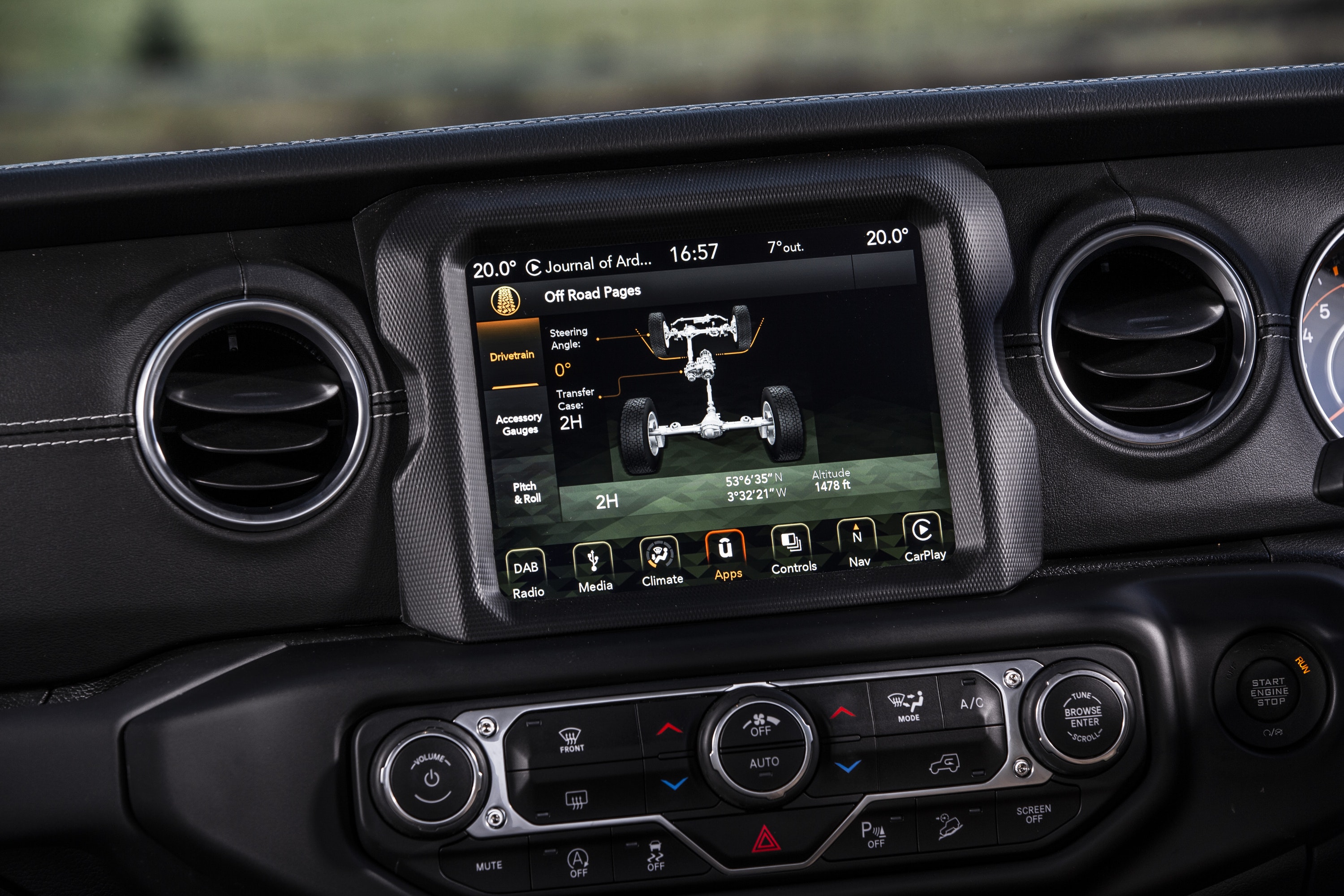 Jeep claims owners are very happy to lavish tens of thousands of pounds on aftermarket kit for their Wranglers – and a key addition to Rubicon models is a heavy-duty electrical system to accommodate this. It includes four auxiliary switches, pre-wired under the bonnet to make fitting winches, spotlights or other off-road gear really simple. Very clever.

Let’s be honest – the Wrangler is a purchase to be made with the heart, not the head. Those who simply need an honest, rugged 4×4 are more likely to buy one of the many pick-up trucks on the market, and those who want a luxury SUV have options from every corner of the market. The Wrangler’s main appeal is in its character – it’s as much of an icon as the Land Rover Defender and a slice of pure Americana. Improvements to its interior and on-road manners are welcome, though.